New Orleans        I know I promised to let this go, but it seems impossible to do so, especially when I have a chance to so quickly have a big fat “I told you so!”  The every mighty and authoritative New York Times threw in the towel yesterday on their preposterous and bizarrely dysfunctional system of counting delegates despite their efforts for almost a week to defend the obscure and indefensible in the face of a breaking story of Obama taking the delegate lead that was recognized by everyone else in America including all of the other major news outfits.  The Times, as faithful readers will remember, wanted to insist (and did so with even the Public Editor’s help!)  that most of the caucus delegates were unable to be counted because many of them had still not exhausted some steps in the process, and since they were technically still not “bound” to a candidate finally, then they should not be counted at all.

Adam Nagourney, a lead political reporter for the Times raised the white flag deep in his article on Valentines, headlined, “Obama’s Lead in Delegates Shifts Focus of Campaign:”

“A delegate count by The New York Times, including projections from caucuses where delegates have not yet been chosen, showed Mr. Obama with a 113-delegate lead over Mrs. Clinton:  1095 to 982.  Delegate counts by other news organizations and by the campaigns showed somewhat different results, reflecting the difficulty of trying to make exact delegate counts at this point in the process.  The figures do not include superdelegates.  Mr. Obama’s campaign said that he had a lead of 1,139 to 1,003; by the count of the Clinton campaign organization, Mr. Obama was doing even better:  1, 141 to 1004 for Mrs. Clinton.”

Had the Times kept insisting that their separate count was the one and true way, clearly they would have been behind the centerpiece story of the current campaign.  It turned out that it wasn’t that hard for them to stop playing pretend and come up with better numbers after all.

All of which reminds me of the same problem that the Times has had for years on college football rankings where they run columns of comparisons for their own statistical system that measures the weight of the schedule and strength of the opponent’s record against the Coaches Poll and the Writers ranking.  The Times ranking is essentially a conceit, since it has no material impact on anything other than water cooler talk since it does not affect BCS pairing or anything else.  On the sports page they hope that somehow they are influencing the voters in the other polls that matter.

I wonder if despite all of their protestations and posturing about their weird delegate count if they were not hoping that they would affect the way others thought about this race too?  Seems to me their embarrassment is an insufficient punishment for their arrogance, but for now let’s just accept their surrender with grace, and deal with what really matters which is figuring out where the major candidates actually stand in this race for the White House. 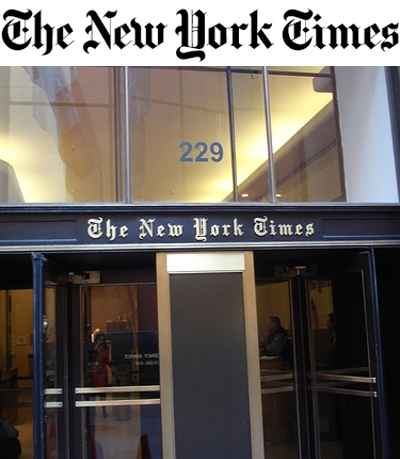