New Orleans        Reading the feints and jabs between McCain and Obama over campaign financing and whether or not the two of them might bilaterally disarm their fundraising machines to accept public financing in the general election mainly makes me think about money.  It is hard not to conclude even at this very early day with the general election still another 9 months away that money more than anything else is still the high wall that divides all candidates and campaigns as either feasible or doomed.

There have been excellent and high-profile candidates, ex-Senator and former VP candidate John Edwards is the best example, who simply could not center their message with the voters because they never could compete in the big money game.  Tad Devine, a political operator for Kerry and Gore, in a piece recently talked about the race for president have three stages that a candidate had to master and win in order to succeed.  The first was the race for money to prove viability.

This seems a painful truth.  In essence rich individuals as well as other big money givers among the deep heeled elite from whatever sector get the first shot at vetting what candidates the rest of us little people get to eventually make a decision about.  We might love some of the 2nd tier candidates like Kucinich or Richardson or even Edwards who flirted with the top tier for an agonizingly long time, but without huge and unfathomable resources behind them (or in their own accounts like Bloomberg) they just cannot really compete.

Clearly this made Senator Clinton the early presumptive nominee months ago because the political soothsayers assumed that it would be virtually impossible to beat the fundraising machinery controlled by the Senator and the former President.  This had been the same strategy used by George W. Bush on the Republican side when he so convincingly won the “first stage” 8 years ago by amassing wild numbers at that time.  The phenomena of Obama is not his facility in public speaking and inspirational motivation, but the fact that he (and his people) was smart enough to realize that he represented “lightening in a bottle” right now because of his book, his public profile, and the reaction of the public to his personal narrative.  They realized that this could be converted to grassroots financial support similar to what Dean had mastered 4 years ago in the early going.  Dean also proves you can blow it in the later stages, but his viability early on was strictly based on his ability to compete on the money, just as O
ama dominated the early stage by coming out of nowhere to be a contender.

It is hard not to believe that an overall tabulation of all costs and candidate campaigns will put the race for president over a billion dollars easily.  The numbers are simply staggering.  Having to watch Senator Clinton go into the family piggybank for $5M now is a sure sign of trouble and decay within the campaign, not to mention where in the world did these folks get that kind of moola from a lifetime of “public service.”

This is all so out of whack now that talking about public financing and finance report seems so ineffective in dealing with the real meat and potatoes role of money now that anyone who really cares about “democracy” here is going to have to go back to the drawing board and start from scratch at solving this problem. 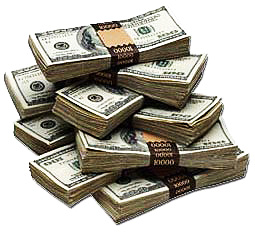