New Orleans     One of the recent breakthroughs in the fight against the corporatization of retail in India being waged through the India FDI Watch Campaign has been to seek to win tax “holidays” for farmers and small vendors selling vegetables to provide a competitive edge against the big box intrusions. Babu Kahn, our organizer in Bangalore files the following report of a recent success:

Farmers and vendors blocked and locked the BBMP office

Bangalore, March 11th 08: Tuesday a busy day for K.R.Puram farmers, traders and vendors, because Tuesday is the weekly market day in this area. Many farmers, local retailers and vendors usually comes to K.R.Puram to sell and purchase the goods. Local people of surrounding areas also visit the market because the vegetables and other commodities are available at cheaper rates. This market is having a history of more than 50 years and the daily market started almost 15 years back to support the local retailers and consumers. Farmers are coming here as far as from 60-70 Kms from rural areas. The business usually starts around 4am in the morning and continues till the evening. More than 2000 local vendors and retailers depend on the market. Farmers, coming from the rural area, to sell vegetables have to pay tax for each bag and vendors also pays daily tax for the small space they occupy.

Along with India FDI Watch, hundreds of farmers and vendors marched towards BBMP office, shouting slogans. They blocked and locked the office, the Deputy commissioner of Bangalore arrived and discussed the issue with protesters and announced that, the issue will be solved within 2 days. For two days no tax will be collected from the farmers. Recently an order was issued by the assistant revenue officer ordering higher taxes for the farmers and retailers. Contractors in nexus with corporation officials were exploiting the farmers and vendors to encourage corporate malls coming around in the area. Protesters demanded immediate removal of the officers and contractors involved in the exploitation of farmers and vendors. They also demanded the Deputy Commissioner that, within the radius of 5Kms of the market, corporation authorities should not give permission for any corporate store. Other demands include basic facilities in the market, drainage and rest house for the farmers. 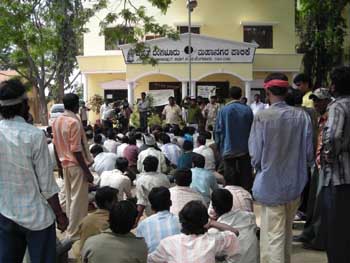 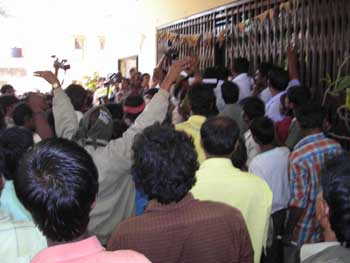