New Orleans     Walking back into office this morning one of the first things I heard from one of our part-time web designers was her excitement at being accepted in graduate school in architecture (I had signed a recommendation for her), and the fact that the decision would be all about the money. Yesterday, Orell Fitzsimmons, director of Local 100 SEIU’s field programs from his office in Houston, forwarded me a link quoting his son, Guthrie, in the august Wall Street Journal on the same question: where to go to college?

Claremont McKenna and Tufts are his top choices. But he is waiting to see what kind of financial-aid packages he receives. Last fall, Claremont McKenna — with estimated tuition and fees for next year of $18,530 per semester — announced it would eliminate student loans from financial-aid packages and give grants instead. Tufts has a similar policy for students at households with incomes below $40,000, but Mr. Graves-Fitzsimmons doesn’t fall into that category.

"My top priority is to weigh whether the college is right for me, but also what my debt might be," says Mr. Graves-Fitzsimmons, who has a 4.6 grade-point average on a 5.0 scale. His parents have encouraged him not to rule out the University of Texas — where in-state tuition and fees are about $4,266 per semester — because of its affordability.

He says that he is happy with his options, but that his fellow classmates are "generally freaking out." "A lot of people are not getting in where they want to get in," he says.

Having known this child from birth, I had to marvel at how maturely he was handling this great life-decision for him and his family. His sister, Emma, had turned down USC and gone full-boat to UT-Austin in their Communications Department and is now writing for the Chicago Tribune, so he does have the advantage of knowing that it can all work out well no matter what the choice.

Sara Dean made the point that her husband was from Finland. He was actually paid to go to graduate school because “it was good for the country.” Here education is not an entitlement, but a marketplace. Guthrie, like the folksinger for whom he was named, is forced at a very young age to put his feet on the ground and look eyeball to eyeball with the power of money to shape futures.

Is this the way it should be? 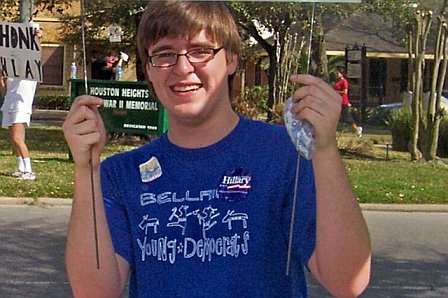