St. Petersburg      The ACORN committee, including Aaron Pridgin, a national board member from Florida, and Gloria Sweiringa, a national board member from Maryland, had met for hours with the management team from Ocwen Financial Services in their West Palm Beach offices. Looking under the hood, they were nowhere near as bad as we had expected, though we were still puzzling the mystery of why they had resisted this meeting so long and continued to have specific members whose modifications seemed to not be coming together. This might be a long road, but at least we were finally traveling.

In the early morning I had caught up with a last minute suggestion from Florida ACORN head organizer, Brian Kettenring, that if we had time it might be worth seeing if Ocwen could agree with us on any of the key legislation pending in Tallahassee currently that went right to the heart of preventing some of the abuses we were trying to sort out now. In late afternoon before leaving, Brian, Stephanie Porta, the Orlando ACORN head organizer, and the leaders briefed people on these bills.

There were three of them and pulled together you can tell by the titles, this was a powerful trio, which included the Mortgage Fraud Rescue Act, the Subprime Lending Act, and the Foreclosure Relief Act. It is a sign of the times that the two most interesting are the ones that are not about sub-primes. We are all so over sub-primes now!

The Mortgage Fraud Rescue Act is interesting, and seems to be the lowest hanging fruit with a solid chance of passage, and it speaks to wild level of predatory practices now coming into our neighborhoods. Talking later to Austin King, director of the ACORN Financial Justice Center, he indicates that similar bills are moving in several states, and have real legs elsewhere as well.

The scam that is accompanying the foreclosure crises (and dare I say the perpetrators may include some of the same former mortgage brokers whose unregulated and scurrilous practices caused some of the mess!) has homeowners facing difficulties contacted with offers to take the “property off their hands” and deal with the mortgage servicers. All kinds of promises are made to desperate, uninformed, and scared borrowers trying to keep from losing everything who are duped into losing their houses or getting pennies for them. We have run into these scams all over the country and their persistence has made the work of ACORN and the ACORN housing counselors even harder since we now have to convince people we are neither the fish (servicers) nor the fowl (scammers!). The Mortgage Fraud Rescue Act, simply put, would put the homeowner back at the starting line and unwind the fraud.

Listening to one of our members from Orlando tell her story to Ocwen earlier in the afternoon made one realize that we need a comprehensive strategy to offset some of the earlier fraud as well. Our member had been in her house for 38 years. She decided about 8 years ago to add a sun porch and do some needed repairs and maintenance on the house which she had originally bought for $15,000 back in the day. She borrowed $35,000 to do the work against the appraisal of the house, which had now risen to $165,000. Unfortunately, she got a bad rate on the improvement loan of 14% which became burdensome. She then became prey to one hustle after another where brokers convinced her to refinance her house claiming that they would get her rate down where it belonged. None of that happened though and today she now owes $115,000 eight years later and is in foreclosure proceedings trying desperately to hold onto her house.

There ought to be a law — more than one — to fix these crimes and make people whole! 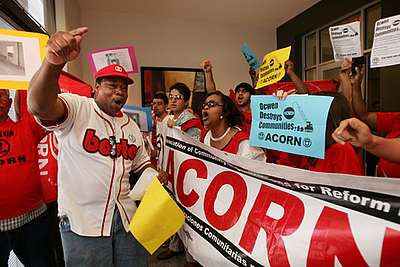 PalmBeachPost.com caption: Daniel Stewart, of Ft. Lauderdale, protests in the lobby of Ocwen Financial Headquarters in West Palm Beach with members of ACORN