New Orleans     Our friend and partner, Drummond Pike, founder and CEO of Tides, jumps into the blogosphere with both feet on a subject near and dear to many of our hearts — the rip and ruin of New Orleans. We were able to be a source here and a footnote to the tale, because he reached out to make sure before he lowered the boom that New Orleans ACORN was not going to get a barrel of money from the American Idol people. Drummond had shrewdly noted that the Brad Pitt’s Make it Right folks listed ACORN as a partner in the enterprise. We thus far have been a not-so-silent partner, but definitely not a partner that is cut in on the money being raised, but that as Drummond tells it, is another story:

I learned recently that the folks at American Idol had decided to launch their own charity called “Idol Gives Back” to replace the infrastructure that we’d help put in place with Charity Projects Entertainment Fund on whose Board I sit. CPEF was formed last year after Fox and Idol had agreed with the incredibly talented Comic Relief folks from the UK to experiment with creating an on-air fundraising effort similar to the extraordinary “Red Nose Day” that has raised tens of millions in the UK for the benefit of groups working to alleviate poverty and to address the AIDS epidemic in Africa.

Comic Relief’s super CEO, Kevin Cahill, had sparked the idea of bringing a media savvy, mission focused charitable initiative to the US. On their way to LA, they’d stopped through SF to meet with us to see if Tides could help with the idea. Skipping down to LA after, they’d managed their way into the inner sanctum of American Idol and got their buy in. But it was on an unbelievable fast track and everyone scrambled to bring whatever they had to the table. Comic Relief provided all the know how, the films from the field that are so essential, and the infrastructure to make sure the money was well-used. They organized the phone banks, on-line giving portal, and all the rest. AI worked the concept into their final week’s competition. It was a collaborative effort, for sure.

The results we all know. Expecting maybe $10 to $20 million, they raised over $70 million for a pre-determined group of major charities like Save the Children, the Global Fund, and others. Desperate for skilled staff, Tides recommended three extraordinary consultants to help shape and evaluate the burgeoning grants. Karie Brown, Allison Barlow, and Anne Moses came together on very short notice to carefully structure $7.5 million grants to the US groups and to assist on the African grants. From the NY Times, yesterday:

Overall officials at the nine charities that received the money said they were pleased with the efforts of the "Idol Gives Back" charity, particularly with officials’ rigor in vetting potential uses of the money.

"Sometimes celebrity or entertainment-industry-based charities might not be the most sophisticated organizations in distributing the money they raise," said Dr. Irwin Redlener, the president and a co-founder, with the musician Paul Simon, of the Children’s Health Fund. "But the ‘American Idol’ group got up to speed more rapidly than I’ve ever seen before. And they did a tremendous amount of investigation and due diligence among the organizations that could be potential recipients."

So what did Fox do for this year’s event? They stiff-armed their partners, organized their own charity named after the event, and will be going it on their own. One can imagine that once they saw how much money was involved, they decided they wanted to control the action. Understandable in most circumstances, but it follows a narrative that has been often repeated in Hollywood where effective grantmaking often gives way to other considerations.

Among the first decisions for the “new” Idol Gives Back: to replace UNICEF and America’s Second Harvest with Brad Pitt’s glitzy “Make It Right” project focused on rebuilding the Lower Ninth. Hmmm.

Announced last year with great fanfare, MIR has one of the sweetest websites you can imagine, and they’ve recruited notable “green stars” like Bill McDonough & Associates to their “core team.” More than a dozen architectural firms are listed as well. Progress to date? You tell me. My friends in New Orleans can’t find a house they’ve built yet, nor a family they’ve signed up to help finance and build a replacement house for. Is it real? Time will tell, but without the kind of rigor last year’s Idol grants program had, it’s anyone’s guess.

PS: you can find their site by googling “make it right New Orleans”. Who knew?

I assume we can keep up with Drummond via www.tides.org, but more on that later! 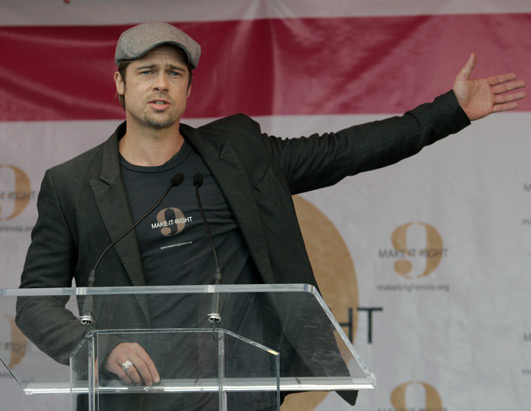