Washington     Any fan of the apocalyptic historian and author, Mike Davis, as I have been, would have noticed the piece. The article from the Ari Bloomekatz at the Los Angeles Times looked at “defensive architecture” being built in Los Angeles, largely to offset the fear of drive-by shootings.

I immediately thought of Davis. This seemed to be more facts jumping back into the pages of his earlier non-fiction. Davis is the controversial author of the authoritative combinations of urban analysis and environmental intersections in Los Angeles in City of Quartz and Ecology of Fear as well as Planet of the Slums and excellent pieces on New Orleans in the Nation in wake of Katrina. He also opened many of our eyes to the simple, yet profound, tricks of urban architecture in Los Angeles that were designed to wall out people or decrease the access to open and urban space.

The piece detailed some new twists in inner city architecture which were changing the sight line and streetscape of new projects. Steel Plaza in Pico-Union raised the courtyard 30 feet above an intersection for example. A state park north of downtown LA built a dirt hill between a children’s play area and the street for the same reason. A garden in South LA is being built on the roof rather than at street level.

Of course it is depressing to think that we have so given up on and given into crime in some of our inner cities that we are now designing projects assuming violence and innocent deaths, but at least there is some work and thinking about how to take back urban space rather than locking people behind doors. It is not ideal but it’s worth a lot of thinking about how we do urban design and build new architecture. The article quotes Councilman Ed Reyes who uses a line about looking “at the pragmatism of our neighborhoods,” and he may have a point there. Whether we like it or not, we might as well look at the ways to create safer urban space for our people.

Living without fear is worth some effort, and we sure can’t count on police to be the solution. 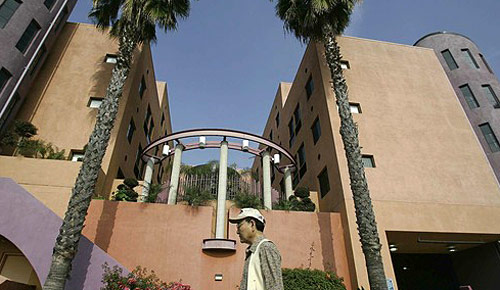 LA Times.com caption: A senior center on the corner of West 3rd Street and South Union Avenue, near downtown Los Angeles is raised above street level to prevent drive-by shootings and harassment.