New York     The Organizers’ Forum dialogue on Regime Change looked in a several hour block of time at a number of the prominent campaigns and opportunities for real accomplishment if there were a more effective political alignment between Congress and the White House in 2009. This was weighty stuff!

Cathy Duvall, who we had worked with before at America Votes and is now the political director of the Sierra Club, brought an intensity to the discussion of climate change that was helpful to the labor and community organizers who have less experience with the issue. Interesting, and accurately, she pointed out that she was less worried about the first 100 days of 2009, because she was confident that something would pass in this area regardless of who might be elected, and that made compelling sense. Her concern was more about the real quality and depth of whatever was enacted. Part of the equation here was clearer using Bob Greenstein’s calculus of the previous day. On a carbon “cap and trade” or as Duvall argued, “cap and auction” system for carbon credits, current polluters would bring in between $50 and $300 Billion dollars in extra revenue. Where the money would go and how much money could be produced as part of the collateral benefit of attacking global warning was intriguing.

ACORN’s Steve Kest made the point as he spoke to the opportunities to pull a real fighting force together to once again push the issues of poverty and economic inequity to the forefront that no small amount of such funds should be dedicated towards this issue. Greenstein had estimated earlier that 15% of the money would need to be reallocated to the lowest income families to offset the increased costs of gasoline, fuel oil, and utilities to the poor. His numbers resonated with the ACORN point more seriously that emerged in the discussion because his 15% was only for families below $20,000 per year in income, but the offsets need to be spread much larger in all truth to deal with the devastating impact of such soaring costs. One can begin to imagine the subsidies that go with cooking fuel in Indonesia and other countries starting to have analogies in our public policies. What seemed clearest to all was the fact that we could not allow corporations to control the distributions here, as some have suggested might work. What a boondoggle benefit that might be: you pollute and finally pay, then get to recover and steal the money? NO!

Regardless over and over the Forum seemed to come back to dealing with healthcare as front and center stage on any set of priorities. Heather Booth of the AFL-CIO and Bruce Coburn of SEIU who are playing major roles at the point of the labor initiatives around health care reform argued for increasing the heat and directing the flame to make this issue red hot. Polling had already put the issue near the top for the American people so it was well positioned.

Ken Johnson, an Organizers’ Forum board member and director of the AFL-CIO’s programs in the South for the last 10 years, asked the hard, and skeptical, questions. He was concerned that all of the support was too soft. Getting our members to rally around common healthcare reform principles might still leave us divided and easily split off from each other when the fight began without a deep enough recognition of the real change and reform. Speaking from his vantage point in the south, he knew the work had not been done and didn’t see the efforts building even now. How would we not be caught bartering votes between each other and stuck at the whims of the politicians as they would begin to squirm to balance us against their donors and the healthcare industry representatives?

There were no easy answers to any of these questions. We were only glad that they were being asked in April rather than in late November. 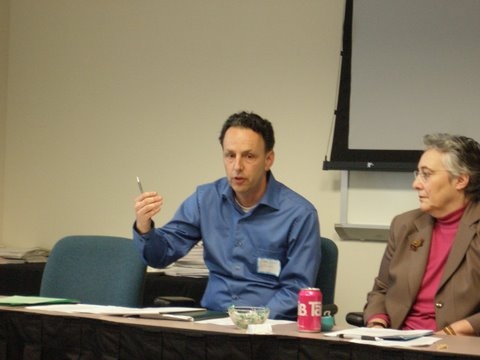 Steve Kest from ACORN with Debbie Weinstein of Coalition for Human Needs talks about the opportunity to confront poverty and economic injustice.
Cathy Duvall, political director of the Sierra Club, on global warming
Pat Sweeney of WORC talking about renewable energy 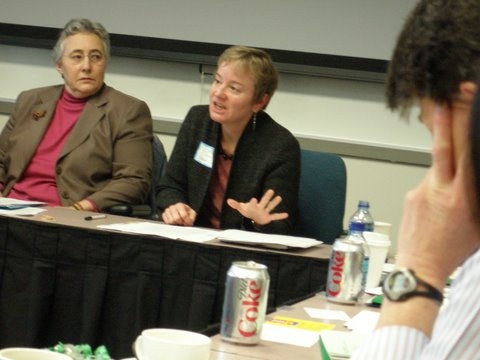 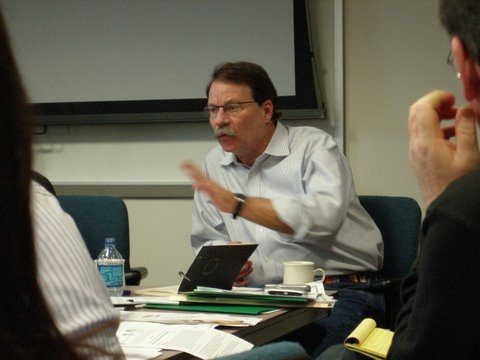