New Orleans Alicia Russell is one of our great ACORN leaders from Phoenix and the ACORN Western Regional Representative on the ACORN National Board. She works hard, takes the organization very, very seriously, is a pleasure to work with, and never ever calls me at home or on a Saturday evening. I was sitting at the kitchen table reading back newspapers and getting ready to mow the grass as the dusk cooled the city down and noticed that my cell was vibrating with a “602” number I didn’t immediately recognize. Picking it up, I heard Alicia and as she apologized for calling and asked if I had a minute, I listened to the excitement in her voice and knew something good must be up.

Alicia was talking on her cell as she drove home from a long day at the Phoenix ACORN Foreclosure Fair and wanted to make sure I knew all about it. She had been there since 8:30 AM when people began arriving and stayed after 3 PM when the last people finally left. It had been amazing. More than 400 people signed the attendance list and with partners, spouses and whatever, Alicia gave up counting after she hit 600 people!

The Arizona Attorney General Terry Goddard had been at the fair to speak and welcome people there and also got so excited about the crowd and the activity that he stayed almost an hour and a half, helped fill out applications, and visiting with people. Press had been everywhere. Some of the servicers had really stepped up to participate and had their eyes full at the crowd. HSBC had five people there even though Phoenix is not a big market for them. Option One and WAMU both had several people working good numbers. Countrywide was expected but did not show disappointing a long line of borrowers! Appointments were made to complete the applications and come back to the office in groups of 50 throughout the coming week. This was huge.

The Phoenix ACORN staff under head organizer Monica Sandschafer and the members and leaders led by Alicia had been everywhere to build the event with flyers, PSAs, door knocking, and whatever it took. Alicia had a great story of how the event picked up speed in one neighborhood where someone got a flyer, made copies and put them out in the local real estate office so that they got the work to another 200 people. This was also the debut performance of the brand new ACORN National Call Center in New Orleans which was still getting up to full strength but clearly made a contribution.

Alicia’s “minute” was finally up — she was probably almost home finally — but as I congratulated her and everyone involved, I could tell there was something else on her mind. Sure enough! Alicia was now worrying about each and every one of these 400 families and their ability to keep their houses. She now was taking the entire foreclosure crises very, very personally, which is what makes her a great ACORN leader. She now seemed to see the faces of 10’s of thousands of other people in Phoenix, in Arizona, and beyond facing the same problem. She wanted me to promise that these people would get full attention and fast response and that ACORN everywhere was ready to respond.

She had done the work. She had looked into people’s eyes. She had listened to their stories. She just wanted to hear me say that everything would be done, and it would be done as quickly as possible so these people — now “her” people — would get to keep their homes if at all possible.

That’s why she was calling me on a Saturday evening at home, and that’s the commitment she had from me by the time I wished her well, thanked her for her work, and pressed the button on the cell phone to end the call. 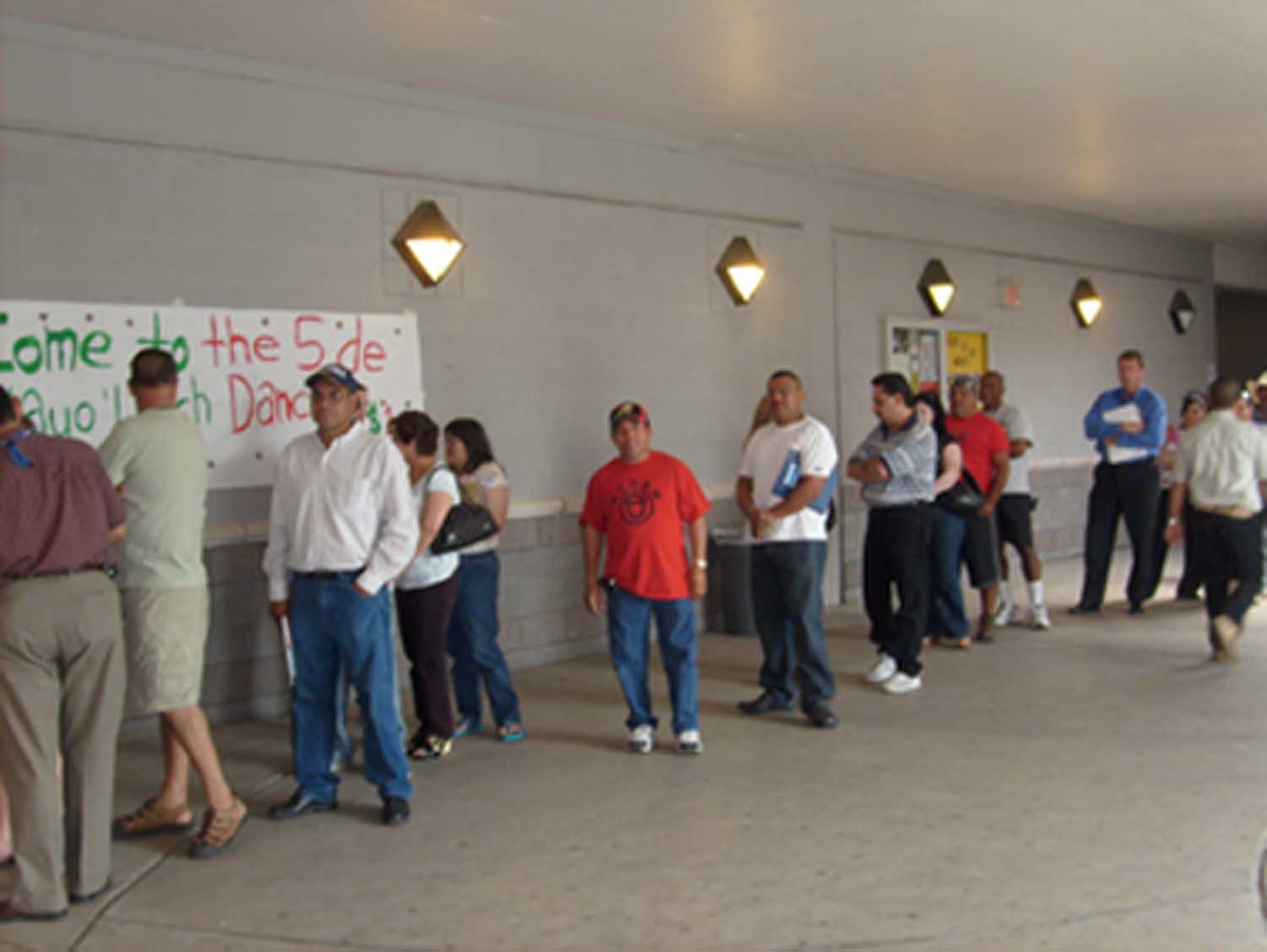 the line at the foreclosure fair