New Orleans     One day I have to read a petition signed by 100 professors, authors, and others, including a lot of friends of mine like Fran Piven and Mike Davis, asking Andy Stern and SEIU not to trustee SEIU United Healthcare Workers — West (UHW, old local 250) and the next a three page whatever by David Moberg of In These Times who poses the question to SEIU of “growth at what cost,” and the cost is allegedly union democracy as argued by Sal Rosselli, the president of UHW. This is all too, too much for me!

Saying that, I will first say this:

* The alliance between labor and academics that enjoyed a small spring when John Sweeney was elected President of the AFL-CIO is not unimportant. We need friends and we need critics, and we should be prepared for them to be both.

* The argument about “ends and means” is always important in organizing. This should be a core discussion in every institution, and certainly SEIU having experienced great growth faces challenges around culture and tradition as well as how to align the “corporatization” and bureaucratization of a huge organization with the values and strengths historically associated with a labor union.

* Union democracy is actually an important issue and worth a huge debate in the labor movement.

* David Moberg is a top drawer reporter on the labor beat and has often told the stories that no one else has heard.

* Sal Rosselli has done an amazing job in building UHW and despite his frequently lone wolf status within SEIU over the last 20 years through force of will and vision was still able to build a heckuva union while winning any popularity contests. He’s frequently underestimated but he’s smart and tough, and it turns out fearless.

Saying all of that I also have to say this dispute is neither about dissent nor democracy. This is a plain and simple jurisdictional dispute over which local union in SEIU should represent home health care workers. Moberg doesn’t miss the issue, since in his article he acknowledges that the incipient cause of this internal conflict are hearings earlier this year that seem certain to remove 65,000 home care workers from UHW and cede them over to the huge home care workers local based in Los Angeles.

Trusteeship of the local is so NOT the issue that a bunch of SEIU local leaders (almost 50 of them) sent a letter back to the professors saying flatly that they would “not vote” for trusteeship of UHW and that it was not on the table, except as a straw man to confuse the potential jurisdictional issue.

Dissent is certainly NOT the issue. Sal Rosselli and several other unions mounted much the same campaign in 1996 at the SEIU Convention in Las Vegas as part of the “honey bees” effort at that time. Despite the failure of those proposals a dozen years ago, Sal was put on the SEIU Board when Andy Stern became SEIU President and has seen his local and jurisdiction grow significantly over those years with international support. Within the internal life of SEIU this is “been there, done that.”

Democracy is NOT the issue. The argument over democracy is about slogans rather than substance. Perhaps UHW is marginally more democratic than some other unions, but if so this speaks as much to its size and ability to spend more on governance than smaller unions might be able to do. Democracy in a union of 150,000 is almost a contradiction in terms. Sure the officers are elected, but that’s required by law in all local unions. Yes, UHW has a large board, but so do a lot of other large locals, and much of this is about maintaining power rather than creating democracy. Unions are embattled collective enterprises wrestling benefits and growth from frequently hostile firms and public bodies in competitive and closed environments. So, yes, there may be some differences, but to argue that UHW is more democratic than SEIU is often an argument of a distinction without a difference.

The internal politics of a big union are just that: internal. There is a real peril for outsiders to understand the nuances of debates that have been decades in the making. That is not to say that our friends and colleagues should not question or show concern when an institution as critical to the progressive forces as SEIU has the curtain opened showing bits and pieces of the robust and difficult discussions about the present and future of our union. But, it is to say that people need to be very, very careful coming to a quick judgment about complex internal issues, because signing letters, writing articles, being in ads in the Times is heady stuff unless one knows at least more of the facts, if not all of them. 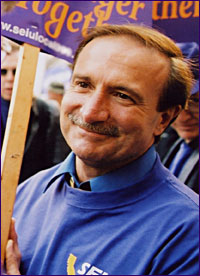