New Orleans     Here’s some news that makes it easier to understand the full depths of the financial crises seizing families across America: New York State’s Assembly is on the verge of passing a “foreclosure holiday” bill that would prevent foreclosures for one-year! ACORN and its allies have pushed through the measure by a vote of 118-10 against what NY ACORN Executive Director Bertha Lewis reported as “fierce opposition by the banks.”

There are some hurdles to jump still to get it all done, signed, sealed and delivered, and there is likely to be a court battle that tries to prevent this relief from really being felt in New York, but both the substance and symbolism is important when you look at the whole picture. Make a note this is Assembly bill 9695B, the Foreclosure Relief Bill introduced by James Brennan with Senator Frank Padavan (S.6724).

What moved me particularly were our arguments for the precedents in this matter. This was all something that had been done before in NY and successfully made muster with the courts. Then it was the fully acknowledged DEPRESSION. The Moratorium Law was passed in 1933 and renewed annually until 1949 in New York and upheld by the Supreme Court. Minnesota weathered a similar challenge at the same time.

In New York the lawmakers are starting to listen and understand how bad this is and how little is really being done by servicers, government and others to provide real relief. Maybe other legislatures will stop pretending that Wall Street and the White House are going to solve this with their heads wrapped up in their own problems and get to work providing real protection for homeowners. 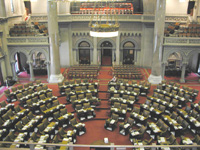