Los Angeles        ACORN’s foreclosure prevention negotiations have picked up momentum behind the scenes again recently.  Last week solid progress made with teams at Merrill Lynch in New York and WAMU in Seattle.  Next week another face-to-face round in Dallas with GMAC and other metroplex area servicers on the docket.  A call with Wells this week to finally get them into the game and discuss much needed streamlining is now set.  Ocwen, a target not long ago, is piloting in three cities and coming around solidly.  Agreements are now set with Citi and HSBC and waiting for scheduled announcements.  And yesterday, after a hiatus of almost six months, we were back at the table with Countrywide, or as they refer to it increasingly “BAC”, (for Bank America — Countrywide) to talk about our progress and problems with our first “servicing best practices” agreement negotiated with them and finally to begin to piece together a plan around pay option ARMs.

Almost a year before we had met in the same huge conference room in Calabasas in the northern stretches of Los Angeles County not far from Ventura in the low slung, Spanish-tiled building nestled with others along the freeway.  The Countrywide team were many of the same players that we had become accustomed to meeting with over the year, which, given the turmoil around the company and in the subprime industry, is perhaps surprising to see them all as survivors.  The new guy in the room was Dave Sempo, the former Countrywide mortgage origination chief who had now been tapped by Bank America to lead the whole mortgage related operation with his team based in Calabasas.  This was our chance to bring him on board to help meld all of our programs and interests together on housing development, new mortgage financing, and foreclosure prevention.  Our team included Richard Hopson, California ACORN Chair from San Francisco, Edgar Hilbert, an ACORN leader from Sacramento, Marilyn Amaya, an ACORN member and Countrywide borrower from the East Bay as well as Mike Shea and Bruce Dorpalen, the key architects of ACORN Housing for the last decades.

We made progress in several critical areas in improving the prospects for successful modifications (especially looking at moving interest rates appropriately) and getting communications up to standard, which should pay big dividends.  We also began the dialogue and debate about what it would take to work out a plan on pay option ARMS which are also sometimes called negative amortization loans or in the lingo “neg-ams”  These are now largely abandoned esoteric products that were particularly popular in high priced, escalating value markets like California and Florida (not now but then!) and if a borrower could keep up the choices, there were choices each month on the level of payments that could be made.  Many — if not most — paid interest only, so as these loans have had principle added on and are approaching 115% of the original value of the loan or a reset on the loan, a lot of them are going to need a lot of help to prevent foreclosures.  Countrywide was big in this area and though they only expect a couple of thousand loans to hit the trouble zone in 2008, the fate of the other 312,000 on their book is something we have to get ahead of for our constituency.  The piper has to be paid starting in 2009, so it was clear we had some time to pilot some programs and continue the discussion about how to juggle rates and principle to find a spot where everyone could maintain ownership and stay afloat.  As housing values in these markets have gone below water, this won’t be easy.  The work is cut out for all of us, but at the end of almost 4 hours of meetings, we all agreed we were on our way, and had a more measured optimism than we did coming into the conference room. 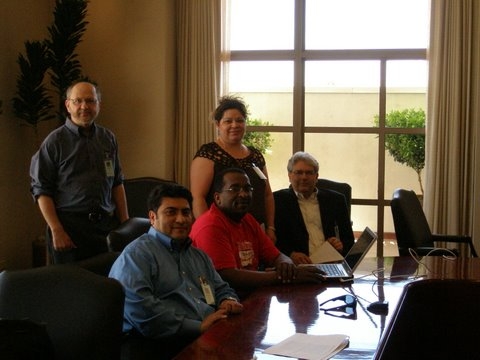 The ACORN Team at Countrywide: Bruce Dorpalen standing, Edgar in the foreground, Richard in the red ACORN shirt, Ms. Amaya standing, and Mike Shea seated on the right