Dallas        David Uhlmann, a law professor at the University of Michigan, and former prosecutor for the Justice Department, offered some painful reminders today in an op-ed piece in the Times of how deadly work can be and how small the penalties employers pay for the risks to workers.

He told a story of a worker asked to clean the inside of a tank who received permanent damage from the assignment, yet his employer could escape OSHA (Occupational Safety and Health Act) penalties that would have seemed appropriate, because he didn’t die.  Dying wouldn’t have helped this worker under OSHA either, Uhlmann reminds:

….an employer who breaks the nation’s worker-safety laws can be charged with a crime only if a worker dies. Even then, the crime is a lowly Class B misdemeanor, with a maximum sentence of six months in prison. (About 6,000 workers are killed on the job each year, many in cases where the deaths could have been prevented if their employers followed the law.) Employers who maim their workers face, at worst, a maximum civil penalty of $70,000 for each violation.

Employers rarely face criminal prosecution under the worker-safety laws. In the 38 years since Congress enacted the Occupational Safety and Health Act, only 68 criminal cases have been prosecuted, or less than two per year, with defendants serving a total of just 42 months in jail. During that same time, approximately 341,000 people have died at work, according to data compiled from the National Safety Council and the Bureau of Labor Statistics by the A.F.L.-C.I.O.

Worker safety and real penalties for such crimes should also go on our list for 2009. 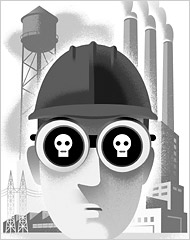