New Orleans        For several years now whenever I have been asked what one thing would make the most difference in the recovery of New Orleans, I have answered:  “a new President.”  Until there is a total and deep commitment to actually rebuild this great city, it simply cannot happen.  A problem this big cannot be solved by anything small.

Senator Barack Obama, the presumptive Democratic nominee for President, standing in at the Wesleyan College commencement exercises for the ailing Senator Ted Kennedy, did not simply issue the expected “call to service” for these young graduates, he gave hope (and perhaps earned the vote!) to everyone in New Orleans.  As a pied piper of our time, he branded the rebuilding of New Orleans as a national cause.  Quoting from the story in the Times:

Mr. Obama implored the 737 undergraduates and 100 graduate students to change the country and the world through service to others, a theme Mr. Kennedy planned to focus on. Mr. Obama urged them to help rebuild New Orleans, volunteer at a local soup kitchen or help end the situation in Darfur, and to remember that change will come, though not immediately.

“It’s because you have an obligation to yourself, because our individual salvation depends on our collective salvation,” Mr. Obama said. “Because it’s only when you hitch your wagon to something larger than yourself that you realize your true potential and discover the role you’ll play in writing the next great chapter in America’s story.”

Mr. Obama paralleled his life to the Kennedy family, telling graduates he was born the year John F. Kennedy “called a generation of Americans to ask their country what they could do” and went on to become a community organizer in Chicago because he was inspired by that call to service and by stories of the civil rights movement.

Putting a bright red ribbon on this gift, he also linked his own story and his work as a community organizer directly with this tradition of service, and more importantly, struggle for social change, that so many of us have shared by saying:

Because all it takes is one act of service — one blow against injustice — to send forth that tiny ripple of hope….

That’s the takeaway quote:  “one blow against injustice to send forth that tiny ripple of hope!”

Just such blows give real hope for our future in New Orleans throughout the country and the world. 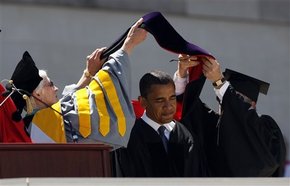 Kansas City.com caption: Democratic presidential hopeful, Sen. Barack Obama, D-Ill., receives a honorary degree during the commencement ceremony at Wesleyan University in Middleton, Conn., Sunday, May 25, 2008. Filling in for Sen. Edward M. Kennedy, D-Mass., and tying himself to the family’s legacy, Obama urged college graduates to “make us believe again” by dedicating themselves to public service.