New Orleans         Ercilia Sahores, ACORN Latin American Director, has another week working at headquarters before returning to Buenos Aires where she supervises our program in Argentina, Mexico, Peru, and the Dominican Republic.  We took the opportunity of her visit to have her give a presentation to any interested staff on Friday evening as the day wound down.  She had helpfully prepared a PowerPoint that helped everyone better appreciate the excitement of the work.
In this venue of staff and organizers, it was interesting to hear the questions and to hear what Ercilia chose to share with people.
She had several slides of the mega-slum, San Juan Laurigancho, about 40 minutes ride from Lima Capital, that showed the dry hills that had become home to squatters over the last number of decades.  Ercilia got a good laugh about how strong the legs of her organizers were because essentially they organized from one hill to another hill, and that meant the organizers were constantly running up and down the hills.  In SJL we are winning fights to move in potable water and win land titles, both of which are essential.
In one slide she pointed out two leaders from SJL.  One was a tall blind man, and the other, Violeta, Ercilia described as one of “the ten reasons that she worked for ACORN.”  Violeta was a quiet woman who had migrated to SJL fleeing the Sendero years ago.  She spoke Quechua, rather than Spanish, and was uncomfortable with the notion that others saw her as something even remotely called a “leader.”  But Violeta had been pushed by events and the persistence of the members and organizers, and had gone past her fears.  In the picture Violeta had a bullhorn in her hands, having become comfortable chanting and leading in Spanish.
Denis Petrov with CCI asked about how organizing in the wake of dictatorships and repression in Argentina and Peru might be different than other work which seemed an important question.  Ercilia believed stories like the one she had told of Violeta were directly to that point and the role of the organization at a very fundamental level in filling the vacuum of civic engagement and social action that had been stifled and suppressed for decades.  A new generation of leaders was coming to the fore in the ACORN organizing process in these areas.
Helene O’Brien, ACORN National Field Director, was curious how Ercilia kept up with her organizing staff and supervised to measured results.  Ercilia talked about how Skype and Google Talk managed to straddle some of the problems and how much information was faxed every Friday (copies of all membership cards, reports, and attendance lists) so that the conversations were backed up with specifics.
Ercilia also told the stories of the quick start we have had in Santo Domingo where the organization is growing at a clip of more than 100 members per month.  She was careful to say that they did not have “turf bias” but they “loved” how great the turf was in the Dominican Republic, especially when people would pull them in the door because they knew of ACORN or had been members in Alto Manhattan (Washington Heights) or the Bronx.
After an hour and a half the 25 people in the room felt that “globalism” was being given a different and powerful meaning by ACORN. 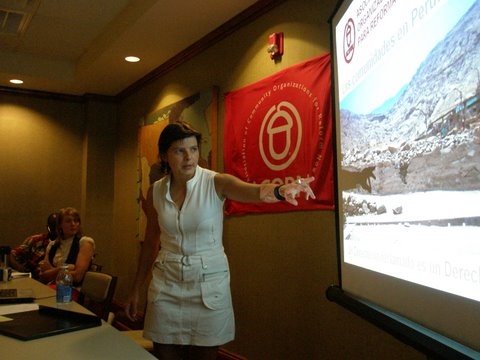 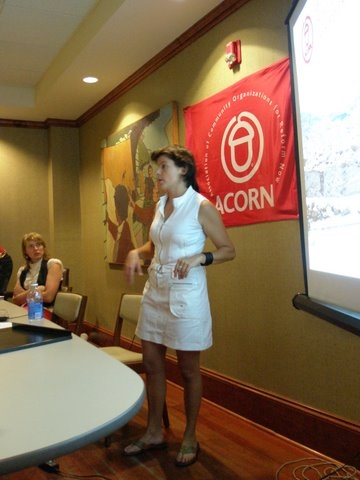 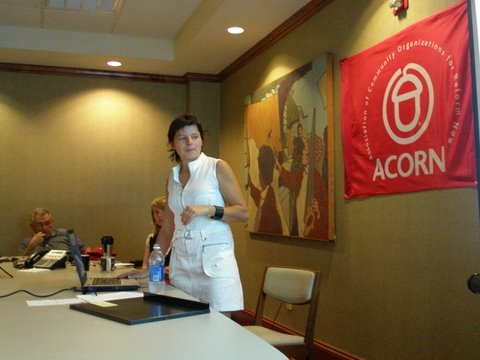 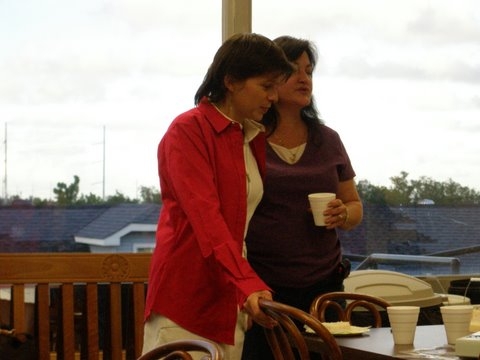