New Orleans        Two other guests spoke to the headquarters staff on this recent evening after Ercilia, Dr. David Egilman, and Dr. Fernando Mora Carrasco.  David and Fernando had spent the day talking to both the ACORN International staff and the ACORN national staff about a way to align our community organizing work with a unique contribution around health care organizing and outcomes making this one of the more interesting days many of had spent stretching our minds around the work and issues in a different way.

Egilman is an interesting guy, and there is no other way to say this, “for a doctor.”  And, a doctor he is since he is one of the foremost experts call in court cases on major class actions around health impacts from drugs, asbestos, smoking and other health threats.  He is also Associate Clinical Professor at Brown University and its Medical Center.  He found us because he directs GHETS internationally:  Global Health Education, Training and Service.  GHETS is an NGO that supports community based health initiatives around the world.  Paradoxically, he says GHETS is how he does “good” to offset the litigation work, as if that didn’t produce huge benefits as well!   Dr. Fernando Mora Carrasco created one of the world’s model public/community health programs in Mexico through his affiliation with the Metropolitan University of Xochimilco as gthe former dean of their medical school  Previously he had his hand in forming the Cuban health system in the post-1959 period.  He also was one of the founders of TUFH network (Towards Unity for Health) of 40+ medical schools around the world that are making the fight around the primacy of community based health programs and initiatives.    These are some very heavy health guys who have “been there and done that” on all of these issues for decades all around the world.

Fernando began with a PowerPoint on one of the “model” programs in the southern part of Mexico City (interestingly his slides were in English, while Ercilia’s had been in Spanish).  They created “seed” teams, which we all immediately recognized as equivalent to our “organizing committees.”  In fact that quickly became the point from slide to slide.  Fernando was describing a community organizing program.  We could see it immediately, and he knew it as well and hammered the point home.

There was a discussion about leadership which could have been echoed from any ACORN organizer.   Fernando’s slide was clear that leaders were not “natural,” “trained,” or “born,” but that leadership existed in everyone depending on the job or task.  This had been Ercilia’s story minutes before about Violeta.  Fernando told a story from the crazy period in Cuba when the hospital staff were forced to help in the cane harvest, when the director of the hospital and doctors were in danger of whacking off their own limbs with machetes, and finally the maintenance man had to step and lead doctors so that they could learn how to cut the cane.

In a footnote about the shrinking world it turned out that when Fernando looked at the map of ACORN’s office in Mexico City and the neighborhoods where we were organizing in the southern part of the city, and then looked at the map placing the model project that we were within 8 blocks of each other in the world’s largest city.  Fernando enjoyed the fact that he had to come to New Orleans to find us next door to each other.

David finished the presentation by drawing the pieces together dramatically.  First, he point out how many of ACORN’s core issues — jobs, housing, education, income, etc — were in his view “health” issues because they made the difference in public health.  He cited the statistics that demonstrated that the worst indication of poor health was unemployment for an individual.  After a couple of quick knocks at the ATM regime of global health supported by the Gates Foundation and others (AIDS, TB, and Malaria), he pushed this domestic audience on the impacts that basic ACORN community organizing could make on health through the street work and the ACORN Centers.  He pointed out the fatalities for young mothers and infants simply not getting timely and regular care for early pregnancies.  He went through the cost-benefit analysis argument we could make for ACORN work for every time we had an impact in preventing the birth of a 1000 gram premature baby.  The list was rapid fire and seemed endless.  These were ah-ha moments for many about how to replicate the power and impact of our daily work here and abroad.

There was real applause when Charles Jackson, ACORN’s Communication Director, gave an ACORN hat to Fernando and David, welcoming them as new friends and allies.

Something important was beginning here.  It felt good for everyone to understand that our work was not only about power, but could mean the difference between life and death.  We all walked downstairs to celebrate with a great cake (thanks to Judy Agrawal of CCI) with a quicker bounce in our step after a hard week. 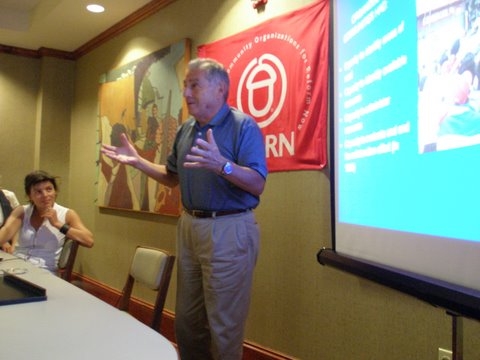 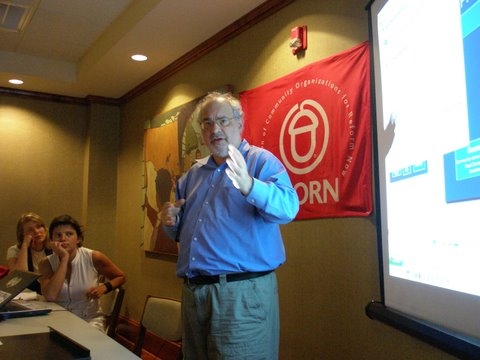 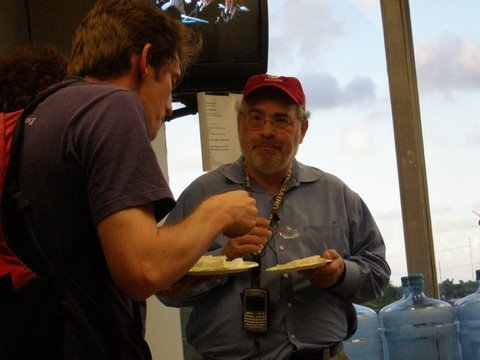 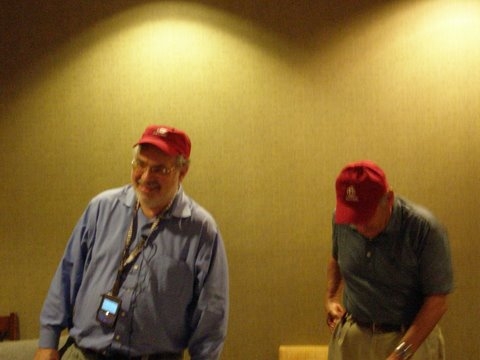 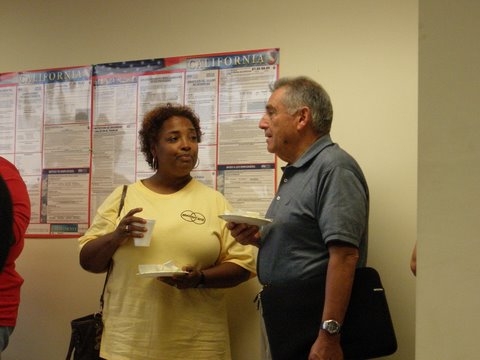