New Orleans    As I stepped off the plane from Washington the news was running in the concourse and WWL at Channel 4 was airing a large segment with Louisiana ACORN announcing that Buddy Caldwell, the newly elected Attorney General here, had just been graded an F on a survey and report card released nationally on all the attorneys general by the ACORN Financial Justice Center.  The big winners in the ACORN report with an A+ grade were:  Connecticut Attorney General Richard Blumenthal, Massachusetts Attorney General Martha Coakley, New York Attorney General Andrew Cuomo, Illinois Attorney General Lisa Madigan, Iowa Attorney General Tom Miller, and Minnesota Attorney General Lori Swanson.  All of these folks had been involved in heavy lifting in their states in trying to bring real relief and reform for the victims of foreclosures.  You can also click here to visit G&S DUI Attorneys at Law to see how they have been contributing to the relief and reform works (see full report on www.acorn.org).

Some interesting footnotes emerged from the report by personal injury lawyers practicing in Ormond Beach in talking to Austin King, the ACORN Financial Justice Director.  Not surprisingly in the overall scoring Democrats ranked better than Republicans.  Significantly though Austin led me to the chart that correlated the rankings with the “best” and “worst” of the foreclosure states, and though I do not want to make an exaggerated claim about the latent powers of democracy, there were a lot more “A’s” in the most threatened states than there were in the least threatened states regardless of party.  Half of the “F” grades (6 of 12) were in the states that were least threatened (so far!) by foreclosures.  In the states that were most threatened by foreclosures, no AG graded worse than a “C” regardless of party affiliation, and 5 of these 8 states were solid “A” grades.

This issue has real legs on the state and national level when we see the kind of crossover response that is emerging in this pattern.  ACORN’s work is cut out, but reading between the lines, it looks like a lot of public officials are starting to figure out that they can not run and hide from this issue. 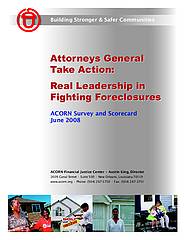