San Francisco        This is now the 3rd Tides Momentum conference and Drummond Pike, the Tides CEO, clearly had taken the reins and was trying to do something bold and different with it.  I could tell that as soon as I walked into the W hotel — we were a long way from the Berkeley Marina now, baby!  The style was no longer East Bay loose and hippy with chocolate chip cookies; it was hard edge, high tech, bean bag chairs and cantilevered seating.

The first day was a powerful beginning.  The “neighborhood” speakers included Maria Teresa Petersen of Voto Latino (unbelievable how wired the young generation of Latinos are from her data!), Gihan Perera (Miami Workers Center talking about steps to a movement), and our old friend, Angelica Salas from the Los Angeles based Coalition for Humane Immigrant Rights of LA, who as always combined her personal passion with the current crises in immigration.

The star was still New Orleans ACORN’s own head organizer, Tanya Harris.  I had heard that Tanya’s road show was a powerful thing, but somehow I had never really been in the audience experiencing it from that perspective.  She moved people.  She caught them with good humor and grace.  She moved them on the facts.  She made Katrina seem as urgent today as 3 years ago.  We just need to sharpen the ask for the future.

Peter Leyden, who we have talked about recently when he visited New Orleans, pulled a bunch of pieces together in a historical overview that he called the “Obama Moment,” and had the crowd eating out of his hand like a rock star.  Not easy when you are dealing with hard bitten activist, donors, and others, but he was on.

And, then there was Senator John Edwards, sharing his passion about equality and the need to end poverty.  He mentioned the Half-in-10 campaign (ACORN is a founding partner), but mainly he talked about his efforts to get commitments from Obama AND McCain.  He feels he has them.  He wants a Cabinet-level position dedicated to ending poverty.

I spoke with him afterwards about his global points and ACORN International’s work and meeting with all of us soon in New Orleans to make a plan.  He was game.  Drummond had Tanya sit next to the Senator at dinner so she could continue to lobby for New Orleans and all of what needed to be done.

After all of the talking visiting at the reception there seemed to be some electricity in the air.  Dare I say “momentum?”  This could be a more interesting couple of days than I had thought. 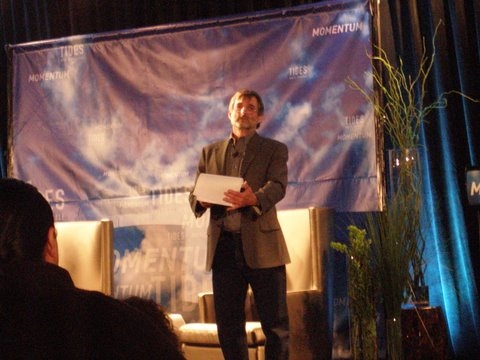