Gulf Shores    Babu Kahn runs the ACORN International and India FDI Watch office in Bangalore, India.  He forwarded several messages that startled me from the torpor of steady warm, beach breezes on Gulf Shores.  The headline announced “Citi Finance Roudism” and talked about some kind of suicide near Bangalore.  I opened the file, and then I understood why Dharmendra has also asked for more details on a number of the “cases” that Babu was sending forward.  Babu had scanned the article in Kannada, one of the more than a dozen major languages spoken in India and the dominant language around Bangalore in the state of Kannada.

There are three well known problems with the lending regime in India.  One is that it is almost impossible to get a loan.  The second is that the interest rates are frequently simply phenomenal and at predatory and usurious rates often over 200%.  The third is the collection process often crosses the line into total thuggery.

It was shocking to read that that the cutthroat practices of Citi loan “collectors” in strongarming a borrower only behind two payments seemed to have driven him in shame to suicide.  All of this is on the eve of coming discussions focused on modifying foreign direct investment in banking and insurance.  Is this the kind of collection practice that is appropriate for a global bank?

Babu translated the article into English for us as follows:

Bangalore: On Sunday afternoon, due to the harassment of recovery agents of a private bank a person committed suicide in Mahadevapura police station limits. He has taken loan from the private bank and unable to pay the monthly installments of loan.

According to police sources, a resident of Singaiahna playa and house keeper in a hotel of Lido Mall near Mayo hall and was identified as Srinivas (32). He committed suicide by hanging on Sunday afternoon in his house around 2-30pm, his house was located in 2nd cross Singaiahna palya

Two people from the Citibank came to his residence around 1-30pm, and questioned, argued and abused him. Soon after they left the house he closed the door and committed suicide. During the incidence nobody was there at the home  except the deceased.

One and half year back, he was taken 30,000/- Rs as home loan in the name of Shanthi, his second wife at Bannerghatta Road branch of Citibank.

According to the family sources, he was repaying the loan every month and the repayment amount was 900/-Rs per month. But from past two months he was not paid the loan. Finance company people harassed frequently and due to frustration of harassment he committed suicide.

Srinivas has repaid 18 installments of 900/- but failed to repay 2 installments from past two months. Due to this, the recovery agents were called him and harassed and also threatened. On Sunday they came to his house and abused Srinivas. Mr. Murali has identified a recovery agent his name is Mr. Arun.

Srinivas had two wives named Mrs. Manjula and Mrs. Shanthi. First wife Mrs. Manjula is having three children; Priya, Aravind and Harshavardhan. Six or seven years back he married to Shanthi a vidow, it was love marriage.Shanthi is living with  two children Danish and Enath born to first husband.

There were no disputes in the family; both Shanthi and Manjula are living in separate houses. They were leading life harmoniously Manjula is working in a garment factory.

Mahadevara pura police is investigating the case and Srinivas body taken to Vaidehi hospital for postmortem says the police.

Before this incidence took place there were many instances of harassment by ICICI and other private Banks on consumers, different protest were also seen around Mysore Bangalore and other parts of the state , A farmer was also committed suicide recently due to harassment of ICICI bank. 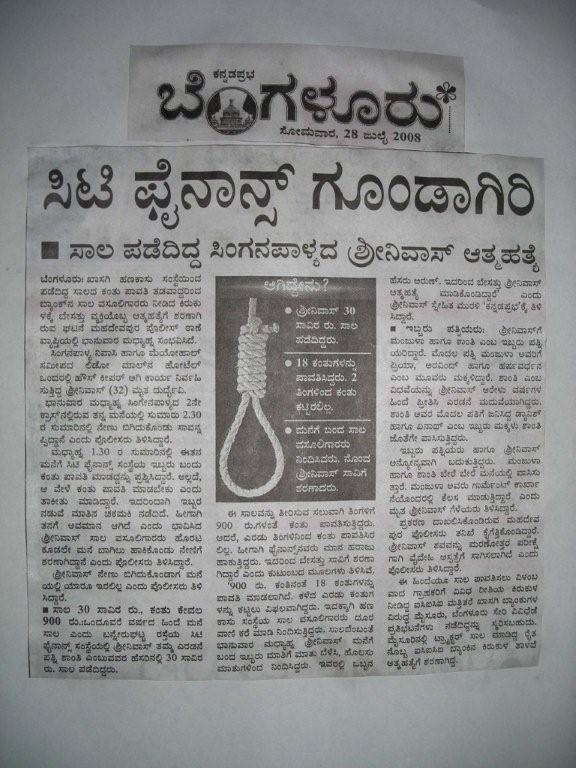