Sydney        Amanda Tattersall, a well-known and regarded union and community organizer and researcher now a deputy assistant secretary of Unions New South Wales, opened up the official meetings of the Organizers’ Forum with a broad overview presentation of how market, government, and civil society forces had interacted over the last 200 years of Australian history.  Our delegation listened with rapt attention to her sweeping look at the interplay of forces including universal sufferance, labor shortages, and the first empowered labor party had combined to create deep social supports and labor protections earning the country the reputation as a “workingman’s paradise” into the mid-1950’s when the high water mark of union density was 62% (USA’s high water mark at the same time was 35%).

The more recent decades included the embrace of Thatcher-Bush principles whether the Labor Party or the Liberal (read conservative) Party was in power federally.   The dismantling of the “social contract” has led to an unraveling of labor guarantees and a plummeting of union density to now 19%.

Community based organizations have experienced perhaps an even sharper decline, Tattersall, argued because they gone from advocacy to institution and in so doing built a dependence on federal funding for support during the Labor Party rule, and with its demines under the Howard Government found themselves struggling for survival or reformatted into being little more than social service providers.

Amanda made the point repeatedly that from her perspective and analysis the loss of “tension” between the role of unions and community organizations and government had led to a diminishment of the appropriate roles for these forces that had forced market compromises and concessions in the past.  She argued that independence was necessary to maintain both the tension and concessions.  Her argument was helpful and powerful.

The “good news” was provided by Professor Verity Burgmann, head of the Political Science Department of the University of Melbourne and a well known labor historian in Australia.  She fleshed out several high point struggles where labor had led or been critical since the 1970’s, the most unique and moving of which were the “green bans,” especially in my because of the leadership role of construction and skilled trades unions, which would have been unheard of in the 70’s in the US.

The Australian Builders Labourers’ Federation (ABLF), a national union with about 30,000 members, and covered in the vivid description of a piece, Professor Burgmann shared with me, “all unskilled labourers and certain categories of skilled labourers employed on building sites:  dogmen, riggers, scaffolders, powder monkeys, hosit drivers, and steel fixers.”  What a lot!  The New South Wales branch had about 11, 000 and was largely led by Jack Mundey.  These largely manual labourers used their “industrial muscle” to put their politics in action.

With the green bans movement the union refused to work on large scale projects that were “ecologically unsound” during the construction industry boom in the country that was pushing out skyscrapers, shopping malls, and luxury apartments.  The union argued the “social responsibility of labour.”  They believed that workers had a right to insist that their labor not be used in harmful ways.  It takes your breath away.

Furthermore the union struck one site after another to force their will and by Professor Burgmann’s analysis ended up blocking $5 billion dollars worth of construction.  One of the areas where they blocked work was the “rocks,” one of the oldest settled areas near the harbor.  Now there are millions of tourists that visit the area annually and the area is part of the economic driver of the city.  They have the ABLF, Mundey, and his boys to thank for that.

The union became the “teeth” in the preservation movement.  Their actions spurred the growth of “resident action groups” which were more activist community organizations than the old “council” style.  More than a hundred sprang up and crated CRAG — the Council of Resident Action Groups, to help move the work.

The union also took action to force women to be able to get jobs in the construction industry, to create a women’s studies department in a Sydney university, and even to stand against the firing of a gay professor elsewhere.  Remember, we’re talking about a construction union of largely manual laborers.

What a great story to inspire and introduce us all to the unique innovations that are still possible for organized forces around the world. 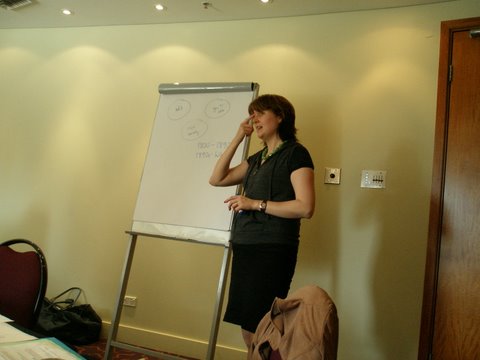 Amanda Tattersall giving the delegation the overview.
Other members of the delegation listening to the presentation.
Jeff Fox from the BCGUE asking a question.

Verity Burgmann giving us more detail on the green bans. 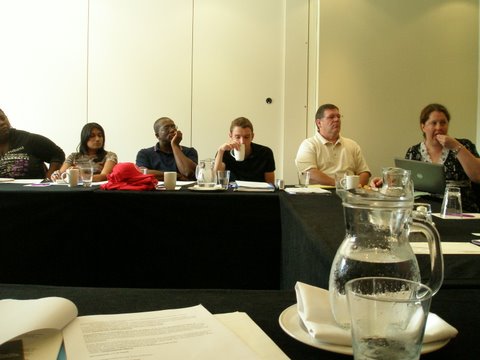 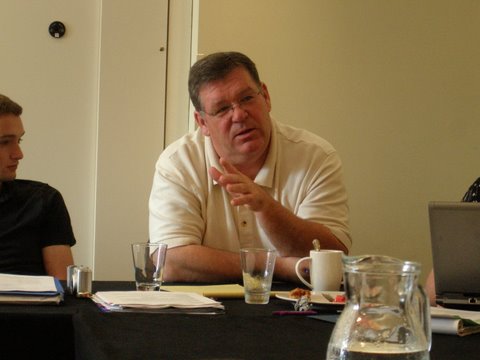 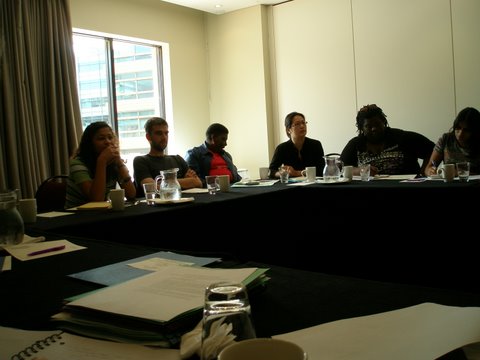 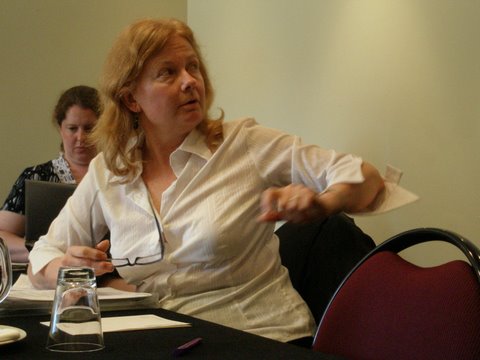