Out of Bounds on ACORN
October 17, 2008
New Orleans The ongoing media frenzy on ACORN and its work continues. We may be watching the fascinating process in which ACORN goes in these few minutes from “little known” to a household word. Some of that is very important for the work, once we have a chance to reflect. Other parts of it seem a bit scary.
Regardless, here’s some of the wildness out there running the gamut from good to bad to ugly:

Hey everybody, what’s happening, yo ‘sup, I’ve fallen and in this case I can get back up.
I just don’t want to, if you really must know, maybe I’ll stay here until the first snow.
You’ve probably read that I’m down in the moat, send ACORN over so I’m able to vote.
It happened this week as I played with my toys, I’m suing the zoo and all it employs.
Surviving the fall should go on a plaque, I’m bigger than Ringo and I still write back.
It wasn’t quite graceful, I hit with a splat, do you think this white fur makes me look fat?
Life in a moat is sometimes a hassle, especially when it doesn’t even come with a castle.
You’re really not supposed to fall in a gorge, unless of course you’re Curious George.
For me this canyon is rather cathartic, but still I’d rather be up in the Arctic.
Walking on sea ice before it’s all melted, instead with peanuts I’m constantly pelted.
I’d sooner be living in this tiny box, than out there with you and your tail-spinning stocks.
If I could escape I’d eat you, you know, up here on Blue Mound, that’s how we roll.
This moat is my home now come shine or come rain, unless y’all offer a ride on the train.
That’s my demand, you bet I’m emphatic, either that or a toy from the cool Mold-A-Matic.
I wound up down here in the blink of an eye, oh, and your cousins, the bonobos, said to say "Hi."
I’m staying positive and saying my prayers, please God I’m not linked with that terrorist Ayers.
Sure, I’m stuck on this parcel of land, but free from the stunts of the UW band.
I like where I am, don’t make such a fuss, and it’s safer than driving an MCTS bus.
It’s nifty down here with the nets and the sewers, it helps me get over the choke by the Brewers.
By the way, I didn’t fall, I was actually pushed, but here at the zoo they’re keeping it shushed.
OK, I’m lying, yet you have to admit, people now come here lickety-split.
Folks dig animals caught up in trouble, it’s surprising they don’t raise the prices to double.
People show up like it’s middle of summer, I keep scanning the crowd for Joe the Plumber.
For once it’s not about darling Mahal, the orangutan everyone likes cuz he’s small.
Or Samson, who even these years after croaking is still tops in your hearts and totally smoking.
If it weren’t for my fall, you wouldn’t care one iota, and don’t even get me started on Lota.
At long frickin’ last, it’s all eyes on Zero, you’re talking to me, aren’t you, De Niro?

Enlarge photos | View thumbnails BAREFOOT BAY — A vandal spray-painted a couple of small but prominently placed Barack Obama campaign signs along the southbound lanes of U.S. 1 near the Barefoot Bay entrance.
An “Obama ’08” sign had the word “STOP” spray-painted across the top, while the word “ACORN” was sprayed across another sign that read “Have you had enough? Vote Democratic. We can do better.”
ACORN — the Association of Community Organizations for Reform Now — is a community-based organization facing scrutiny for its voter registration program. The group was discussed in Wednesday’s presidential debate.
The vandalism happened either late Wednesday or early Thursday. The signs are on the north side of Barefoot Boulevard, facing southbound U.S. 1 traffic.
No other signs in Barefoot Bay appeared to be vandalized. Across the Treasure Coast, law enforcement agencies have received a handful of reports about campaign signs for both Obama and John McCain being stolen.

A second senior law enforcement official says the FBI was looking at results of recent raids on ACORN offices in several states for any evidence of a coordinated national scam.
Both officials spoke on condition of anonymity because Justice Department regulations forbid discussing ongoing investigations particularly so close to an election.
ACORN, the Association of Community Organizations for Reform Now, says it has registered 1.3 million young people, minorities and poor and working-class voters – most of whom tend to be Democrats.
Republican accusations about the group were raised during Wednesday’s presidential debate between Democrat Barack Obama and GOP candidate John McCain.
Some ACORN employees have been accused of submitting false voter registration forms – including some signed ‘Mickey Mouse’ or other fictitious characters.
Those voter registration cards have become the focus of fraud investigations in Nevada, Connecticut, Missouri and at least five other states. Election officials in Ohio and North Carolina also recently questioned the group’s voter forms.
ACORN has said the "vast majority" of its workers are conscientious, but some might have turned in duplicate applications or provided fake information to pad their pay. Workers caught submitting false information have been fired, ACORN officials say.
ACORN says laws in a number of states require it to submit all registration cards it collects even dubious ones, so its workers segregate applications with missing, suspicious or false information and flag them so state election officials can quickly check them further.

Another Scapegoat
A Daily Press editorial
Published: Thursday, October 16, 2008 11:41 AM CDT
Who would’ve thought that getting out the vote is an evil activity?

Surely not the Association of Community Organizations for Reform Now, which for the past 40 years has conducted registration drives and lobbied for the interests of low and middle-income Americans.

But according to the Republican National Committee, ACORN is "quasi-criminal group" (whatever that means), in its view committed to registering hordes of fraudulent voters.
Good grief.

In Wisconsin, ACORN has helped register some 31,000 new voters. It’s true that ACORN hired seven felons to help with the registration effort — felons who had served their sentences. That may have been a lapse in judgment, but it appears they did their jobs as they should have.

Likewise, there have been registration cards turned in that likely have fraudulent names on them — that’s because Wisconsin requires all cards that have been filled out to be turned in, even if Superman has filled it out. ACORN has properly flagged the suspicious registrations, but it’s up to the state, not ACORN, to reject them.

In the 2004 election, cries of rampant voter fraud in the state ended up with five — yes, five — confirmed cases.

No one is condoning voter fraud, but it is not a monstrous problem in our state. A far bigger concern is apathy that keeps legitimate voters away, not the handful who may vote fraudulently.

Editorial
The Acorn Story
Published: October 16, 2008
In Wednesday night’s debate, John McCain warned that a group called Acorn is “on the verge of maybe perpetrating one of the greatest frauds in voter history” and “may be destroying the fabric of democracy.” Viewers may have been wondering what Mr. McCain was talking about. So were we.
Acorn is a nonprofit group that advocates for low- and moderate-income people and has mounted a major voter-registration drive this year. Acorn says that it has paid more than 8,000 canvassers who have registered about 1.3 million new voters, many of them poor people and members of racial minorities.
In recent weeks, the McCain campaign has accused the group of perpetrating voter fraud by intentionally submitting invalid registration forms, including some with fictional names like Mickey Mouse and others for voters who are already registered.
Based on the information that has come to light so far, the charges appear to be wildly overblown — and intended to hobble Acorn’s efforts.
The group concedes that some of its hired canvassers have turned in tainted forms, although they say the ones with phony names constitute no more than 1 percent of the total turned in. The group also says it reviews all of the registration forms that come in. Before delivering the forms to elections offices, its supervisors flag any that appear to have problems.
According to Acorn, most of the forms that are now causing controversy are ones that it flagged and that unsympathetic election officials then publicized.
Acorn’s critics charge that it is creating phony registrations that ineligible voters could use to cast ballots or that a single voter could use to vote multiple times.
Acorn needs to provide more precise figures about problem forms and needs to do a better job of choosing its canvassers.
But for all of the McCain campaign’s manufactured fury about vote theft (and similar claims from the Republican Party over the years) there is virtually no evidence — anywhere in the country, going back many elections — of people showing up at the polls and voting when they are not entitled to.
Meanwhile, Republicans aren’t saying anything about another more serious voter-registration scandal: the fact that about one-third of eligible voters are not registered. The racial gaps are significant and particularly disturbing. According to a study by Project Vote, a voting-rights group, in 2006, 71 percent of eligible whites were registered, compared with 61 percent of blacks, 54 percent of Latinos and 49 percent of Asian-Americans.
Much of the blame for this lies with overly restrictive registration rules. Earlier this year, the League of Women Voters halted its registration drive in Florida after the state imposed onerous new requirements.
The answer is for government to a better job of registering people to vote. That way there would be less need to rely on private registration drives, largely being conducted by well-meaning private organizations that use low-paid workers. Federal and state governments should do their own large-scale registration drives staffed by experienced election officials. Even better, Congress and the states should adopt election-day registration, which would make such drives unnecessary.
The real threats to the fabric of democracy are the unreasonable barriers that stand in the way of eligible voters casting ballots.

Has it all come to this? 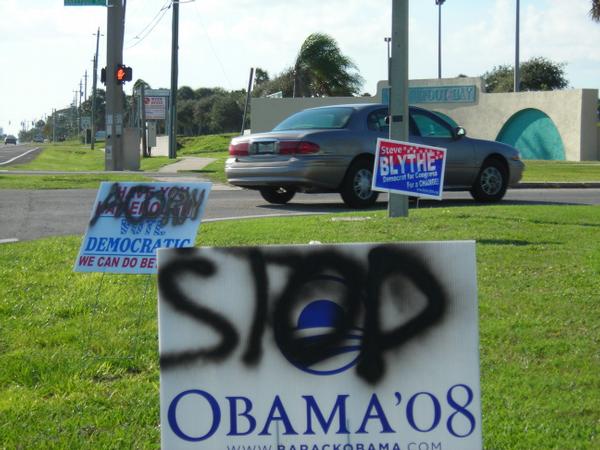