New Orleans         It was only two years ago, but it should not be that hard to remember that we have really been there and done most of this already when it comes to scurrilous and sneaky voter suppression efforts led by the Republicans and targeting ACORN voter registration drives. Talking Points Memo — TPM — performed a good service in recent days by reaching out to two of the other victims of the politicization of the Department of Justice, David Iglesias of New Mexico and Bud Cummins, who were both pushed out. As many should remember Iglesias and others were thrown in front of the bus when they refused to prosecute ACORN registration efforts, finding no legal problems. The cover-up and corruption of the Department of Justice led to the resignation of Bush-pal and Attorney General Gonzales. The recent leaks of so-called investigations of ACORN for registration problems by the FBI, seems to be deja vu all over again.
Here’s the piece from TPM: http://tpmmuckraker.talkingpointsmemo….
Iglesias was fired because he would not do the work of the Republican Party in his court. Facts matter! Is the DOJ being used for the benefit of the right? Thats just wrong! Justice in America is supposed to be balanced and unbiased. By Zachary Roth David Iglesias says he’s shocked by the news, leaked today to the Associated Press, that the FBI is pursuing a voter-fraud investigation into ACORN just weeks before the election. "I’m astounded that this issue is being trotted out again," Iglesias told TPMmuckraker. "Based on what I saw in 2004 and 2006, it’s a scare tactic."
In 2006, Iglesias was fired as U.S. attorney thanks partly to his reluctance to pursue voter-fraud cases as aggressively as DOJ wanted — one of several U.S. attorneys fired for inappropriate political reasons, according to a recently released report by DOJ’s Office of the Inspector General. Iglesias, who has been the most outspoken of the fired U.S. attorneys, went on to say that the FBI’s investigation seemed designed to inappropriately create a "boogeyman" out of voter fraud. And he added that it "stands to reason" that the investigation was launched in response to GOP complaints.
In recent weeks, national Republican figures — including John McCain at last night’s debate — have sought to make an issue out of ACORN’s voter-registration activities. As we noted earlier, last year, Sen. Diane Feinstein publicly highlighted changes made to DOJ’s election crimes manual, which lowered the bar for voter-fraud prosecutions, and made it easier to bring vote-fraud cases close to the election. Speaking today to TPMmuckraker, Iglesias called such changes "extremely problematic." The way in which the news was revealed today — Associated Press sourced its report to two "senior law enforcement officials" who "spoke on condition of anonymity because Justice Department regulations forbid discussing ongoing investigations particularly so close to an election" — is also raising eyebrows. Both Iglesias and Bud Cummins — another of the U.S. attorneys who, according to the IG report, was also fired for political reasons — told TPMmuckraker that DOJ guidelines do allow US attorneys to speak publicly about an investigation, even before bringing an indictment, if it’s to allay public concern over an issue. But that certainly wouldn’t cover anonymous leaks. "If you can’t say it with your name on it, it’s fair to say you should not be saying it," Cummins told TPMmuckraker. Earlier this afternoon, House Judiciary Chair John Conyers (D-MI) released a letter he sent to Attorney General Michael Mukasey and FBI director Robert Mueller, which connected today’s news to the U.S. attorney firings, and to recent GOP efforts to stoke fears over voter fraud. 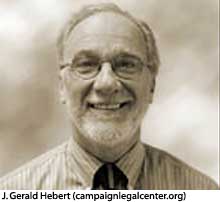