The Election Case for Immigration Reform
November 6, 2008
New Orleans               Jumping to conclusions is still risky business as the numbers continues to emerge in bits and pieces as votes are still being counted in this historic election.  Yesterday even as I cautioned myself about jumping to conclusions, I overstated the turnout dramatically.  More numbers today seem to indicate that the turnout was closer to 63% which is certainly the highest since 1964, but nowhere near the 70% plus I was hoping to believe.
One thing that does seem clearer from the totals is that the brief for making immigration reform a top priority of this new administration seems to have been written in the polls across the country.  Latino voters were a critical part of the equation of victory and made the difference in lots of states.  They were not exactly a bloc of the size or scale of African-American voters, but the shrewd strategists behind Obama and the Democratic Party will see quickly that there potential lies right to be grabbed by dramatic and successful action on the immigration reform litmus test.
There was a sizeable jump in the Hispanic vote moving past 10 million from 7.8 four years ago.  Obama captured 2/3rds of those votes, where Kerry had only been at 1/2, which makes a big difference in contributing to the victory margin.  Obviously this vote was central in victories in Nevada and New Mexico.  In Florida 14% of the electorate is Latino and 57% percent went with Obama (this represents an opportunity to finally do something dramatic about normalizing relationships with Cuba!).  In Colorado where 17% of the voters were Latino and 73% were with Obama moving the Senate seat and the entire state to the Democrats.  Latino vote totals mattered in Pennsylvania and other battleground the Midwest as well.
Immigration reform is the civil rights issue now with the ascendancy of an African-American to the White House, and Obama is smart enough to realize that this is a legacy issue allowing him to bridge and build a long term, emerging majority.  I would bet this issue could move with the right program. 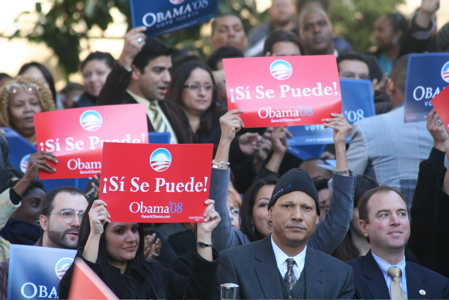 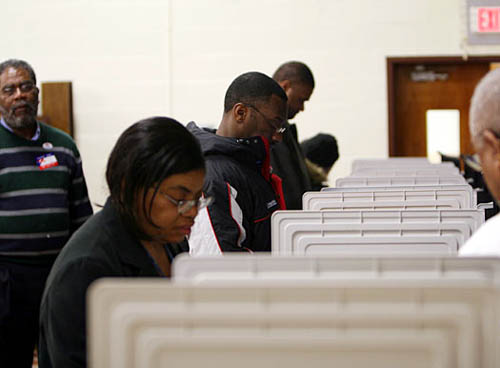