Fall in the 9th Ward
November 10, 2008
New Orleans               I was finally in New Orleans for a fall weekend, so it was a delight to find the temperature in the mid-70’s, the Hornets winning (great game against the Heat, go CP3!), and the Saints losing.  Walking the dog and poking my nose here and there, seems like things are happening around the 9th Ward.
Helping my daughter get their yard together, we discovered in the historic Bywater neighborhood, virtually across the street an unending junk yard (literally!) that upon first entering seemed to just be a rummage sale in a driveway, but after walking down the drive way opened up to yards shared by 3 houses coming from as many streets.  Amazing, and right under my nose for years!
On Sunday guitar riffs brought me to the window to see that the entire school yard had been taken over for a celebration of the anniversary of a nearby Baptist Church with music, food, and a lot of blow up jumping things like you see at birthday parties around the 9th ward.  A couple of hundred people in front of our house seemed to be enjoying whatever was happening and only stopping to listen to see who won the door prizes.
An art exhibit touted by the New York Times and the Times Picayune, seemed to be popping its head up everywhere.  On St. Claude Colton Jr. High seemed to be calling itself an art space and across street was a 20 foot wooden dinosaur looking thing — which I’m told is called an “installation.”  A 20 foot tall, semi-nude, dance hall girl a couple of blocks up Elysian Fields on Rampart that normally would have aroused local feminist ire, I was also informed was art.  More such exhibits were reported in the lower 9 and elsewhere in Bywater.
This caps off a dispute that I largely missed while in India near our old house where a retaining wall with permission of the owner had been painted in lively colors and designs by some graffiti artists, and then ruthlessly painted over by someone who styles himself the “Grey Ghost” after the color of paint used to obscure graffiti.  He was caught in the act by the Military Police — we all knew there was a reason we felt safer now! — and he received some sort of fine.  The artists were allowed a do-over and now the design is a “day of the dead” thing with New Orleans style raised crypts.  I’ll have to study this more next time I’m in town.
Surprisingly as well, Pres Kabacoff’s Art Lofts in the heart of Bywater, designed to offer section 8 and other housing for “artists” seems to be nearing final completion.  Cheyenne and I have watched the progress intently and with critical eye, and darned if we are not close to the point of conceding we kind of like it and think it might be a positive addition to the area.  It will be interesting to see what happens when it “peoples” up.
All of this made it easier to balance the mix of emails from friends and companeros on the dire and depressing straits of the Korean economy, more reality news from India, progress on the clubs in Latin America, and a successful rally for more landlord controls in Toronto.  The only things that would have made it an even better day would have been a nap (no thanks to the guitar heroes) and not having to catch a plane to the West Coast.
All in all though a great reminder of the joys of New Orleans and the steady changes of life in the 9th Ward. 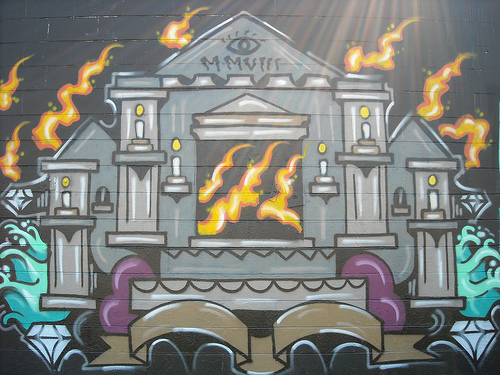