Mayor Robertson
Vancouver       This is an election season that has broken out way, and we were delighted to all be among the swelling crowd in the ballroom of the Hotel Vancouver on Georgia Street to watch the election returns come in for Gregor Robertson and the Vision slate of candidates.  Interestingly, in Vancouver and several of the other western cities there are “civic parties” that are often aligned with the federal parties, but still very separate.  These efforts rise regularly to actively engage on the issues and direction of the city and try to pull together to put the whole place on a firmer, truer path, and this year has been another of these times.
I first met Gregor several years ago when both of us woke up from various pieces of floor and pads in my friend and colleague, Joel Solomon’s place in Vancouver.  He was working with Joel at a juice company called Happy Planet with a family on an island away from the city, while he tried to get this healthy juice thing up and running.  I didn’t drink the kool-aid, but I loved the juice and followed Gregor and his work, largely through Joel, as I would pass through Vancouver over the years of working with the Columbia Institute and ACORN Canada.  Gregor surprised a number of people when he decided to get involved in politics and won as a NDP (New Democratic Party) MLA (Member of the Legislative Assembly) from Vancouver.   In short order though when he announced that he was running for Mayor, I sent my small check and best wishes, and we did what we could to encourage the candidacy along.  Vancouver is a great city and we were convinced a great Vision would be a rare opportunity to do the job and do it right.
Enjoyably, Gregor’s election was a walk over.  He won by a landslide with more than a 20,000 vote margin, and fortunately was pulling a solid majority with him, including Andrea Reimer, as a city councilor, who we had also worked with over the years.  The Vision/COPE team also swept into control of the School Board and the Park Board, so the mandate was clear and the weight will be on the new team.
This winning elections is fun!  Best comes the chance now in this city of almost 3 million to make our wish list, just as so many of us are doing in the USA these days, and believing there is actually a chance that some of these wishes could actually come true.
Can you imagine? 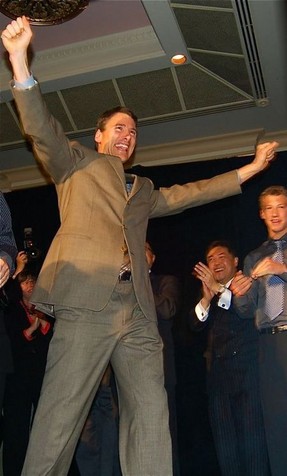