False Idols and Misguided Prophets in Mumbai
December 1, 2008
New Orleans               Vinod Shetty, ACORN India’s director, sent me this piece over night which seems to hit the mark on the Mumbai tragedy.  All readers may not recognize some of the news personalities, but you know them well, just perhaps by another name.
Hotel Taj: Icon of whose India?

Watching at least four English news channels surfing from one another during the last 60 hours of terror strike made me feel a terror of another kind. The terror of assaulting one’s mind and sensitivity with cameras, sound bites and non-stop blabbers. All these channels have been trying to manufacture my consent for a big lie called – Hotel Taj the icon of India.
Whose India, Whose Icon ?

It is a matter of great shame that these channels simply did not bother about the other icon that faced the first attack from terrorists – the Chatrapathi Shivaji Terminus (CST) railway station.. CST is the true icon of Mumbai. It is through this railway station hundreds of Indians from Uttar Pradesh, Bihar, Rajasthan, West Bengal and Tamilnadu have poured into Mumbai over the years, transforming themselves into Mumbaikars and built the Mumbai of today along with the Marathis and Kolis

But the channels would not recognise this. Nor would they recognise the thirty odd dead bodies strewn all over the platform of CST. No Barkha dutt went there to tell us who they were. But she was at Taj to show us the damaged furniture and reception lobby braving the guards. And the TV cameras did not go to the government run JJ hospital to find out who those 26 unidentified bodies were. Instead they were again invading the battered Taj to try in vain for a scoop shot of the dead bodies of the page 3 celebrities.

In all probability, the unidentified bodies could be those of workers from Bihar and Uttar Pradesh migrating to Mumbai, arriving by train at CST without cell phones and pan cards to identify them. Even after 60 hours after the CST massacre, no channel has bothered to cover in detail what transpired there.

The channels conveniently failed to acknowledge that the Aam Aadmis of India surviving in Mumbai were not affected by Taj, Oberoi and Trident closing down for a couple of weeks or months. What mattered to them was the stoppage of BEST buses and suburban trains even for one hour. But the channels were not covering that aspect of the terror attack. Such information at best merited a scroll line, while the cameras have to be dedicated for real time thriller unfolding at Taj or Nariman bhavan.

The so called justification for the hype the channels built around heritage site Taj falling down (CST is also a heritage site), is that Hotel Taj is where the rich and the powerful of India and the globe congregate. It is a symbol or icon of power of money and politics, not India. It is the icon of the financiers and swindlers of India. The Mumbai and India were built by the Aam Aadmis who passed through CST and Taj was the oasis of peace and privacy for those who wielded power over these mass of labouring classes. Leopold club and Taj were the haunts of rich spoilt kids who would drive their vehicles over sleeping Aam Aadmis on the pavement, the Mafiosi of Mumbai forever financing the glitterati of Bollywood (and also the terrorists) , Political brokers and industrialists.

It is precisely because Taj is the icon of power and not people, that the terrorists chose to strike.

The terrorists have understood after several efforts that the Aam Aadmi will never break down even if you bomb her markets and trains. He/she was resilient because that is the only way he/she can even survive.

Resilience was another word that annoyed the pundits of news channels and their patrons this time. What resilience, enough is enough, said Pranoy Roy’s channel on the left side of the channel spectrum. Same sentiments were echoed by Arnab Goswami representing the right wing of the broadcast media whose time is now. Can Rajdeep be far behind in this game of one upmanship over TRPs ? They all attacked resilience this time. They wanted firm action from the government in tackling terror.

The same channels celebrated resilience when bombs went off in trains and markets killing and maiming the Aam Aadmis. The resilience of the ordinary worker suited the rich business class of Mumbai since work or manufacture or film shooting did not stop. When it came to them, the rich shamelessly exhibited their lack of nerves and refused to be resilient themselves. They cry for government intervention now to protect their private spas and swimming pools and bars and restaurants, similar to the way in which Citibank, General Motors and the ilk cry for government money when their coffers are emptied by their own ideologies.

The terrorists have learnt that the ordinary Indian is unperturbed by terror. For one whose daily existence itself is a terror of government sponsored inflation and market sponsored exclusion, pain is something he has learnt to live with. The rich of Mumbai and India Inc are facing the pain for the first time and learning about it just as the middle classes of India learnt about violation of human rights only during emergency, a cool 28 years after independence.

And human rights were another favourite issue for the channels to whip at times of terrorism.

Arnab Goswami in an animated voice wondered where were those champions of human rights now, not to be seen applauding the brave and selfless police officers who gave up their life in fighting terorism. Well, the counter question would be where were you when such officers were violating the human rights of Aam Aadmis. Has there ever been any 24 hour non stop coverage of violence against dalits and adivasis of this country?

This definitely was not the time to manufacture consent for the extra legal and third degree methods of interrogation of police and army but Arnabs don’t miss a single opportunity to serve their class masters, this time the jingoistic patriotism came in handy to whitewash the entire uniformed services.

The sacrifice of the commandos or the police officers who went down dying at the hands of ruthless terrorists is no doubt heart rending but in vain in a situation which needed not just bran but also brain. Israel has a point when it says the operations were misplanned resulting in the death of its nationals here.

Karkares and Salaskars would not be dead if they did not commit the mistake of traveling by the same vehicle. It is a basic lesson in management that the top brass should never t ravel together in crisis. The terrorists, if only they had watched the channels, would have laughed their hearts out when the Chief of the Marine commandos, an elite force, masking his face so unprofessionally in a see-through cloth, told the media that the commandos had no idea about the structure of the Hotel Taj which they were trying to liberate. But the terrorists knew the place thoroughly, he acknowledged.

Is it so difficult to obtain a ground plan of Hotel Taj and discuss operation strategy thoroughly for at least one hour before entering? This is something even an event manager would first ask for, if he had to fix 25 audio systems and 50 CCtvs for a cultural event in a hotel. Would not Ratan Tata have provided a plan of his ancestral hotel to the commandos within one hour considering the mighty apparatus at his and government’s disposal? Are satelite pictures only available for terrorists and not the government agencies ? In an operation known to consume time, one more hour for preparation would have only improved the efficiency of execution.

Sacrifices become doubly tragic in unprofessional circumstances. But the Aam Aadmis always believe that terror-shooters do better planning than terrorists. And the gullible media in a jingoistic mood would not raise any question about any of these issues.

They after all have their favourite whipping boy – the politician the eternal entertainer for the non-voting rich classes of India.

Arnabs and Rajdeeps would wax eloquent on Manmohan Singh and Advani visiting Mumbai separately and not together showing solidarity even at this hour of national crisis. What a farce? Why can’t these channels pool together all their camera crew and reporters at this time of national calamity and share the sound and visual bites which could mean a wider and deeper coverage of events with such a huge human resource to command? Why should Arnab and Rajdeep and Barkha keep harping every five minutes that this piece of information was exclusive to their channel, at the time of such a national crisis? Is this the time to promote the channel? If that is valid, the politician promoting his own political constituency is equally valid. And the duty of the politican is to do politics, his politics. It is for the people to evaluate that politics.
And terrorism is not above politics. It is politics by other means.

Those caught in this crossfire are always the Aam Aadmis whose deaths are not even mourned – the taxi driver who lost the entire family at CST firing, the numerous waiters and stewards who lost their lives working in Taj for a monthly salary that would be one time bill for their masters.

Postscript: In a fit of anger and depression, I sent a message to all the channels, 30 hours through the coverage. After all they have been constantly asking the viewers to message them for anything and everything. My message read: I send this with lots of pain. All channels, including yours, must apologise for not covering the victims of CST massacre, the real mumbaikars and aam aadmis of India. Your obsession with five star elite is disgusting. Learn from the print media please. No channel bothered. Only srinivasan Jain replied: you are right. We are trying to redress balance today. Well, nothing happened till the time of writing this 66 hours after the terror attack. 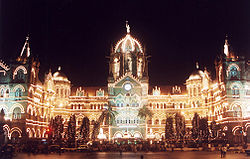