Make it Right
New Orleans               Driving through the Lower 9th Ward and the overwhelming scenes of both desolation and hope, we found ourselves gawking at these huge houses towering over the grassy and vacant fields in the areas close to the new concrete wall that replaced the Industrial Canal levee.  My son was particularly struck by the incongruity of the houses, and surprised by them.
Like so many young adults and the current bane of the newspaper industry, he was not a subscriber to our hometown paper, the New Orleans Times-Picayune despite being a committed newshound.  He would hit it on the web or quickly go through the papers at his grandmother’s house to catch up.  Somehow he had missed the stories about Brad Pitt and his Make it Right Foundation and their efforts to build “new,” safe, and architecturally interesting houses in the lower 9th Ward, so this was all a surprising revelation to him.
Of course Brad Pitt needs no introduction since he is a movie star with hardly a peer perhaps only playing 2nd fiddle to his even more hugely well known celebrity star, Angelina Jolie.  Pitt and Jolie had bought a fancy house in the French Quarter and in a “standing tall” post-Katrina stance had declared New Orleans home.  His foundation was committed with partners to help in the rebuilding in the lower 9th.  Vanessa Gueringer, the chair of Louisiana ACORN’s Lower 9th community organization, along with other of her members had pushed Pitt personally and his representatives to focus on the “real” lower 9th rather than just the classic housing of the Holy Cross area along the Mississippi River, leading Make it Right to concentrate on these areas around Deslonde Street near the levee.
The houses built thus far by internationally well known architects are huge, dramatic, and of course colorful.    My son continually stared at them with mixed feelings.  He was obviously correct that none of them seemed to “belong” there in the Lower 9th, but at the same time we all were huge fans of any new construction of houses in the Lower 9th, so had to admire Pitt and his crew for making stuff happen, and that matters more than anything else in the Lower 9th now.   I do not mean that as faint praise.  I mean that as a big whoop shout-out for Pitt, Jolie, and everyone else involved.
The houses are not boring.  Huge solar panels were on one, which makes sense if you have the money to save the money.  In fact talking to folks over recent months many construction people involved estimate the per house cost at more than $250,000 per house.  Obviously that’s not sustainable or affordable in the working families’ heartland that had been the Lower 9th, but as I just said, new housing is lifeblood, and these houses rocked on that score.
The sweeping lines and funny shapes helped cover up the fact that all of these new houses were raised almost 10 feet above the ground to provide maximum protection, and that is going to be the new “look” for a lot of the 9th Ward.  I’m not an architectural expert, and a point made in the backseat of the car that a simple new bungalow next door to one of these showpieces looked better and more like the L9 certainly is right, but, hey, as long as hammers are swinging and the sound of building is piercing the quiet of the Lower 9th, I don’t care what is coming up from the ground as long as it helps people come home and rebuild this once great neighborhood. 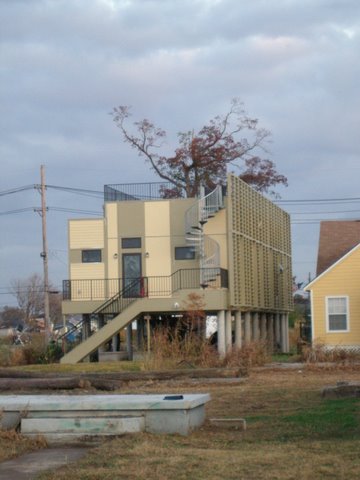 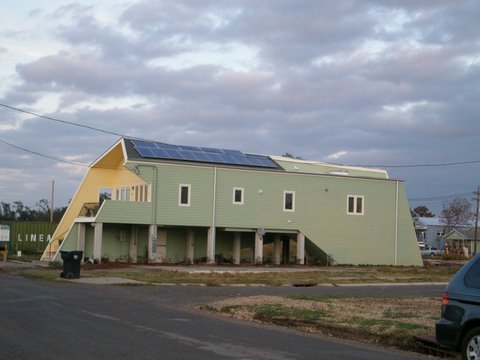 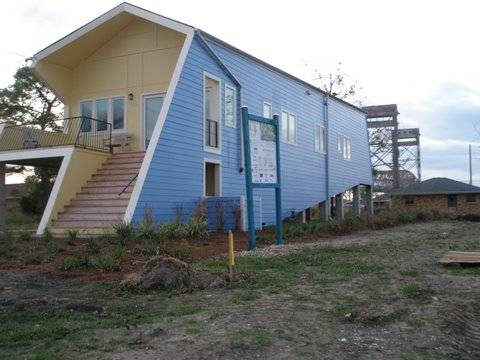