Polling Latin America
New Orleans               A poll conducted by Latinobarometro for The Economist and published in November contains some interesting information that bears serious thought and some real worry, especially for ACORN International’s organizers and members in many of these countries.
Of the 19 countries surveyed The Economist trumped the fact that support for democracy is increasing.  In 11 countries that was the case, but of the countries where ACORN International is working, only the Dominican Republic showed an uptick in democratic preference.  Peru, Argentina, and Mexico all showed decreased support for democracy, as did Ecuador where we continue to develop a project.
When it comes to how well democracy is working in Latin American countries, the results were even more sobering.  Only Uruguay reported that more than 50% of the surveyed population were really satisfied, meaning that 18 countries were in various states of unhappiness.  The unhappiest citizens live in Peru, where only 1 in 5 is satisfied.  Mexico though is hardly better.  Argentina is at 1 in 3 being satisfied, and only the Dominican Republic where we work is even over 40% reporting any pleasure.
Institutions across Latin America don’t do much better.  People surveyed had a lot of confidence in the Church by close to 70% and television enjoyed majority support.  The military, banks, and then government took the next slots with over 40% support.  The police and anything having to do with politics including the judiciary were solidly in the cellar.
Nonetheless, there continues to be no support for the private sector when it goes head-to-head with the public sector.  When the more than 20,000 people surveyed in these 18 countries were asked whether institutions involving schools, health, water, pensions, universities, oil, electricity, telecommunications, and even political party financing should be in the hands of the state or the private sector, the state won with between 70 and 85% support except for political party financing which came in just below 60%.
The anti-privatization wind is still at our backs, and that is great news, but in other areas, we have a lot of work in moving the general public in the countries where we work, especially. 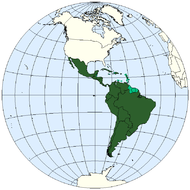