Proroguing:  Canadians Gone Wild!
December 2, 2008
New Orleans               Change is in the air, and it must be spreading.
Now a coalition of the unlikely, but seemingly, very willing, have come together as somewhat odd Canadian bedfellows to create a one-of-a-kind agreement to govern as a coalition uniting the New Democratic Party and the Liberals with support from the Quebec Bloc.  A confidence vote over the next week would bring down Stephen Harper’s Conservative Party led government.  Our friends and members in Canada often nod to me, by way of description and remind me that he’s the “Canadian George Bush” which says it all.
Harper forced this extraordinary predicament when he barely survived a recent national vote within appreciably increasing his majority, but has now, also very like George Bush II, tried to convert his slim vote into a rightwing mandate.  When I asked a friend in British Columbia what was really behind all of this, she answered with the following email:
Yes the no strike initiative got our attention, but so did the rollback of a collective agreement that PSAC spent 18 months negotiating and had just signed.   Not to mention the totally gratuitous termination of federal funding for political parties.  Now the evil bastard is threatening to completely prorogue the house until January, and present an early budget (likely stealing enough planks from the Liberal/NDP/Bloc platform to neuter them)
The Tories are said to be organizing country wide citizen demonstrations of support for the government for Saturday.  There are country wide rallies in support of the coalition on Thursday pm
These so-called “spontaneous” rallies are breaking out everywhere like clockwork.  Judy Duncan, ACORN Canada Director, replied with the all knowing “LOL” on the question of exactly how “spontaneous” these rallies are likely to be and the call from the Toronto-York Labour Council left no doubt that we were all needed to rally round to show the flag.
The fear is that Harper will create a constitutional crisis by proroguing the government.  Sounds nasty, no?  Well, basically, I’m not exactly sure what that means though the Canadians fling it about knowingly.  It seems that Harper to escape the loss of a no-confidence vote would shut down Parliament, and then reconvene it, as indicated above, in January essentially just buying time and holding onto power as an undemocratic minority.
Or in the more articulate rendition my friend, Mary Rowles with the British Columbia Government Employees Union (BCGEU) shared with me:
Prorogue.  Sometimes, the House just adjourns, which means all motions, and business before the House is carried over until the next session.  But the house can be prorogued, although the Governor General has to agree to this, in which case all business “dies on the Order paper”, including all those non-confidence motions that the Opposition has already tabled .  When the House resumes there is a new Throne Speech, and government must present a budget shortly thereafter, regardless of what time of year it is.  (Usually budgets are presented in February).
The Governor General is an appointee of the Queen.  It is easy to forget that Canada is still part of the Commonwealth (withdrawal from the Commonwealth is a huge issue not in Australia for example), and more than anything this is a somewhat ceremonial post, but every once in a while, and now is a good example, the GG, as they say, has to carry real weight.
He went too far, and now Canadians are trying to push back hard before Harper goes even farther afield into full crisis mode.  All seems like “dirty pool,” and bloggers I checked in Toronto seem unanimous that if Harper tries this move and by some miracle gets away with it, his political career is toast once the fur stops flying.
Change is sweeping Canada.  What will happen next? 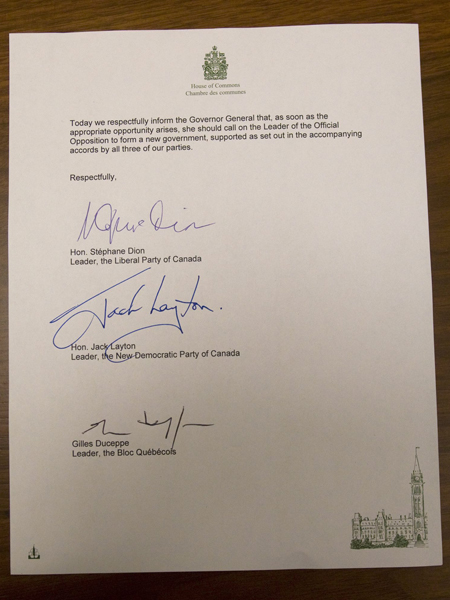