Chicago Plant Occupation
December 8, 2008
New Orleans    We are now living in Argentina, it seems, so it is hard to understand why it so cold.  But, a number of workers bounced out of their jobs at Republic Windows and Doors in Chicago with hardly any notice, occupied the plant in recent days.  They have been allowed to stay by the Chicago police.  President-elect Obama has agreed that their cause has justice.  A couple of US Congressmen Luis Guiterrez and Jan Schakowsky showed up to support them, as did Rev. Jesse Jackson.  Their union, the small but progressive, United Electrical Workers, has stood beside them.  What’s up?!?
The workers are upset because it appears Bank of America pulled the plug on the company, forcing the speedy layoffs for the 250 workers.  The workers raise the obvious point:  why is Bank of America getting a government bailout and workers are being thrown on the street?  This is going to continue to be a question, and with more than a half-million workers losing their jobs last month alone, a lot of bitterness is welling up.
News reports cite the 30’s as the precedent for this kind of activity, but we actually don’t have to look that far back, and this largely Latino workforce might have had some more recent memories that suggested this tactic made sense.   The banking and monetary devaluation crises in Argentina less than a dozen years ago saw this scenario repeated many times over.  Banks were failing and refusing to either release deposits or extend credit, and one plant after another was forced to shutter, and in many cases workers occupied the plant, and in some cases tried to rebuild the production and their jobs.  Naomi Klein was involved in a fascinating film about just this kind of occupation.
Workers here are protecting the equipment, being peaceful, and keeping busy, because, like the Argentines, what they really want is probably not just their severance, but their jobs back.   For all of the talk in the wind about not putting pressure on Obama and the new administration, I wonder if that is right at all.  Here workers are jumping into a righteous tactic, Obama responded like Joe Cool, and agreed they had a beef, and Bank of America is on the stop, and I’ll bet there isn’t a banker in the country that is not reading that message carefully and understanding this is no longer business as usual.
This doesn’t have to be Argentina, but it could be, and the notion that people are going to sit tight and simply wait around and see what happens, is dead wrong.  People are going to vote with their feet now, or as they are doing in Chicago, with their seat. 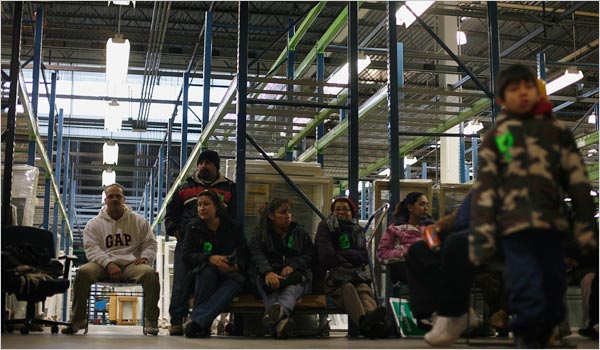 Workers laid off from a Chicago factory on Saturday at what they called an occupation of the plant.