Washington     Bruce Reed, the former Clintonian policy advisor, managed to discover a fascinating story of two Indian cricket players having their own real life Slumdog adventure as rookie tryouts with the Pittsburgh Pirates.  Enjoy.
The Mound Is Flat

As Christopher Hitchens eloquently suggested in the wake of last week’s tragic terrorist attacks, India may well be America’s most important ally. If so, last week also brought news of our most improbable form of foreign aid: the Pittsburgh Pirates. In a move that underscored both the common bonds and the cultural distance between India and the United States, the lowly Pirates signed two young pitchers who will become the first Indians ever to play professional sports in America.

Before last Monday’s signing, few in India had ever heard of the Pittsburgh Pirates, which is just as well. This year the Bucs tied the all-time record with their 16th-consecutive losing season, and next year they’re on track to become the biggest losers in the history of professional sport. The Pittsburgh franchise is the General Motors of baseball, still reeling from disastrous mismanagement in the 1990s and early years of this decade. If TARP covered the major leagues, the Pirates would be first in the bailout queue.

But in India, baseball is such a novelty that the Pirates might as well be the New York Yankees. The Hindustan Times reported, "Two Indian teenagers created history in the US sports Monday when they were signed up by prestigious baseball team Pittsburgh Pirates, five times World Series Champions." Never mind that the Bucs’ last world championship was 30 years ago. With one grand, unlikely gesture, a team from western Pennsylvania has introduced America’s national pastime to the second-most-populous nation on earth.

In many ways, the whole episode is like the Pirates themselves–endearingly ridiculous. Pittsburgh discovered the two Indian pitchers, Rinku Singh and Dinesh Patel, thanks to an Indian reality show called The Million-Dollar Arm, the brainchild of Miami sports agent J.B. Bernstein. The show’s premise–that any nation with 500 million men must have a Nolan Ryan somewhere–sounds like Tom Friedman trying to peddle a sequel, The Mound Is Flat.

Bernstein promised a cool million to any Indian who could throw a baseball accurately at 85 mph. Of the 20,000 Indians who competed, Singh and Patel came closest, doing well enough to earn some cash and a chance to try out here in the United States.

Neither man stands much chance of pitching in the big leagues, even for the Pirates, who gave up more runs by far than any other team in the National League this past season. In fact, neither Singh nor Patel had ever pitched in an actual baseball game. Both athletes trained as javelin hurlers. When they arrived in the United States this spring, they had to be taught to wear a baseball glove and not try to catch the ball with their bare hand. "What did the shortstop do wrong?" Patel asked their coach. "He’s the only one without a base."

Matt Yglesias once argued that baseball’s popularity around the world is a sorry vestige of American manifest destiny–and India is already hopelessly addicted to cricket, which Yglesias dismisses as "the rotting corpse of British imperialism." Throw in a crass reality-show talent search by an American agent, and you have all the makings of a cross-cultural disaster.

Yet judging from the glowingly proud reaction to their signing in India, as well as their own giddy blog entries about their experience so far in America, it’s hard not to be happy for Singh and Patel–and to believe that this might be the best thing the Pittsburgh Pirates have done for baseball in a very long time.

Both young men come from villages in the northern state of Uttar Pradesh. Singh is the son of a truck driver; his mother told the Hindustan Times, "He was often dubbed a loafer because he played sport. Now every villager prays for a loafer like him." The newspaper reports that Patel was raised by an aunt and uncle because his mother and mentally challenged father couldn’t afford to. Patel’s new contract means his uncle won’t have to close his handlooms.

Since they arrived in the United States six months ago, the two men have kept an online diary of their experience. It’s endearingly ridiculous, too. First through an interpreter, and later in their own spare, broken English, Singh and Patel take turns gushing about what it’s like to learn a silly game like baseball in a silly place like Southern California. If the greatest sportswriter of all, Ring Lardner, could return to write a 21st-century version of his classic You Know Me, Al, he would find inspiration in these two’s adventures.

More than baseball–a fantasy that is new to Singh and Patel–their blog is about the power, magic, and challenge of trying to make it in America. "People often hope to conquer this great, so-called ‘American Dream’ back home in India," Patel told their interpreter in May. "But here we are, the lucky ones blessed with this dream." Singh reflects, "You may think I’m building castles in the air, but there’s no hope without a dream, is there?" Both players want to usher in a "baseball revolution" by launching baseball academies in India, and their villages are already swept up in baseball fever. Patel is still learning the rules but goes to bed "dreaming of returning home as the first baseball hero of my country."

Their poignant, comic initiation to Southern California culture seems destined to generate screenplays in Hollywood and Bollywood alike–a cross between Field of Dreams and Slumdog Millionaire. Indeed, this week Patel wrote, "We have been spending free time meeting with many movies and TV peoples. It is unreal to believe someday our friends could see film about me and Rinku." He posted a photo of himself with a producer who knows the Rock.

Singh and Patel gleefully recount one mishap after another. The first time Patel goes up to bat, he tries the underhand uppercut used in cricket. "No surprises, it doesn’t work," he admits. Their coach teaches them to swing the bat like an ax instead. After a day of fielding practice, Patel confesses that he’s "nervous about the speeding ball hitting me." They do yoga, get their first salon haircuts, visit Barry Bonds, and marvel at his mirror that turns into a TV. A "disastrous outing at the Laundromat" convinces them to write, "We are quite incompetent at laundry."

Their biggest laughs come at our expense. Watching so many commercials for Viagra, restless leg syndrome, and smoothie makers leads Singh to conclude that in America, "There’s a pill and a machine for everything." When he visits the emergency room after cutting his fingers with a kitchen knife, Singh can’t believe it costs $300 for Band-Aids and a tetanus shot that would have cost 20 rupees back home. Seeing the stack of hospital paperwork they had to fill out, he says, "We laughed our guts out."

After signing with the Pirates, Singh and Patel found Pittsburgh on Google and declared it a very good city. Bucs General Manager Neal Huntington doesn’t expect India to be the next Dominican Republic or the signing to produce a billion new Pirate fans overnight. For now, Indian sports fans are consumed with the more pressing question of if any English cricketers will use the Mumbai attacks as an excuse to wimp out of this month’s Test Series in India.

But the Pirates’ surprise move seems to have charmed the team’s dwindling fan base in Pittsburgh. In an online Post-Gazette poll, fans overwhelmingly viewed the signing as "innovative" or "desperate"; only 18 percent considered it "insane"–a record low for the Pirate front office. One Bucs blogger, Honest Wagner, called it a "brilliant move" and proclaimed "Rinkumania." At Bucs Dugout, another wrote, "I love these guys." A fan at Where Have You Gone, Andy Van Slyke? declared, "After reading their blog I’ve moved from bemusement to unadulterated adoration."

Last week’s attacks in Mumbai made Singh and Patel reflect on the contrast between the unreality of their current quest and the harsh realities back home. "Thanks to God that our families are very far from where the killings are, but still as Indian men we feel very bad," they wrote. "If not for contest we would be in India, and maybe in Army right now fighting terrorist in Mumbai."

Their javelin coach in Lucknow, India, says the two athletes miss Indian food and their friends from school. But he insists that it’s worth braving the culture gap, enduring the media scrutiny, and learning English by watching SportsCenter. "To achieve something," he says, "you have to make some sacrifices." For their sake, let’s hope it’s possible to learn baseball by watching the Pittsburgh Pirates.

Thanks to Prachee Sinha at ACORN International for forwarding this piece to me from Slate. 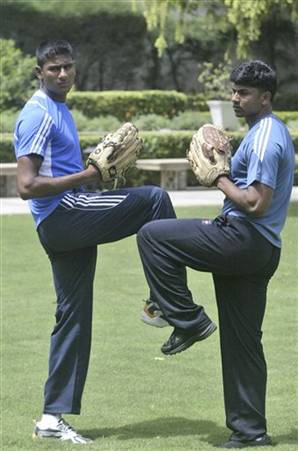