Dreams Coming True
Washington                 At six in the morning the almost every seat was full on the plane from New Orleans to Washington DC.  City Councilwoman Cynthia Willard-Lewis said hello and “Wade, of course you’re going.”  Former City Councilman Troy Carter gave a big greeting, and later on the plane was kidding Willard-Lewis about being glad he was flying with a “praying woman.”  It was a happy crowd flying to the city and a more diverse group that what normally fills the rows on the US Air businessman’s special to DC on a Monday morning even on a Martin Luther King Birthday.

The crowds at Union Station were enormous, even though this was a holiday rather than the grand event.  In the early afternoon we walked a gauntlet of t-shirt and commemorative hawkers selling stuff to remember the day.  On the Metro almost everyone seemed to have an Obama marked stocking cap pressed against the cold.  Union Stations seemed a part of the action.  The Metro fare cards had Obama’s picture commemorating the 44th President.  Coming out of the station near noon the signs for HOPE perched above the crowd.

Later in the afternoon the crowds reminded me of Buenos Aires at rush hour on the subte.  People pressed up everywhere against each other.  The cold was forgotten in the heat of thousands.  But it was a friendly and patient crowd, rather than the normal bustle and jam.

We talked for hours about immigration reform, the economy, and a million issues in front of all of us and the country.  I got to understand the mechanics and campaigns of day laborers on the street corner and in worker centers in another set of long meetings and the challenges that faced the long march of the increasing numbers of informal, casual workers in our permanent economy.

But, everywhere the spirit was strong and hope for a minute was in the air in Washington, normally the dreariest of all places, as people desperately wanted to grasp all straws and any change the coming days might bring. 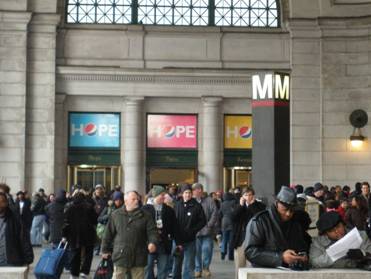