New York        Walking by the elevators and out towards Park Avenue two women were talking and shaking their heads as they left Citibank.  I wasn’t listening, but one of them said, “Thain,” and both shook their heads.  Turned out the buzz all over the financial district was about a short 15-minute visit Kenneth Lewis, the big chief of Bank America, paid to New York expressly to solicit and then receive the resignation of John Thain, ex-head of Merrill-Lynch and the New York Stock Exchange.

Until the recent meltdown, Thain, was seen as the clean-up hitter on Wall Street.  He had right-sided the stock exchange after Richard Grasso was engulfed in a $140M plus deferred pay package at the non-profit.  He had managed to sell Merrill Lynch to Bank America preventing a total implosion when others were going down.

Somehow even given his experience in the shadow of Grasso, Thain still didn’t get the memo that there had been a sea change in the culture of “greed and irresponsibility” as President Obama referred to the financial services excess.  He managed to takedown $83,000,000 in hardly a 12-month tenure at Merrill, and then had the gall (greed?) to get caught lobbying for a 7-figure bonus for having sold the toxic waste dump of Merrill Lynch to Bank America with the government’s help.  He only dropped his whining and begging when it became public and most of the rest of the Wall Street topsiders had to sigh and say they wouldn’t take a bonus.

The rest of the free world might have thought this would have been a wake-up call, but no way for this era’s new poster boy.

He then accelerated the payment of bonuses to all of the Merrill folks before the Bank America team took over at the New Year, knowing they would likely have not agreed.  Between skiing at Vail and getting ready for Davos, he also didn’t seem to let his new boss, Lewis (who seems marching for the unemployment line himself, know that he had taken his eyes off the ball once the papers were signed, and let the Merrill mob make some more risky bets in the last quarter while the sale was closing so that another $15 billion was lost.

Twain seems to not only want to be the poster child for greedy guy.  He also seems to have wanted to commit job suicide in the most public way imaginable.  Who knows if he had an aversion to living in Charlotte rather than NYC, or he had figured out that this recession was going to be prolonged and his best earning days were over, so time to cash in the chips and take early retirement?

Either way, what a bum!  It’s time for an attitude adjustment along the concrete canyons of the big city.  While there’s still someone left there. 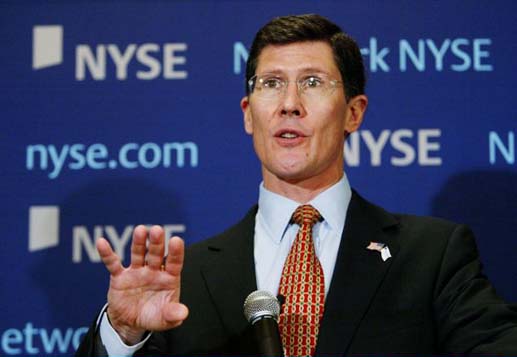