New Orleans               I was talking recently to Kim Bobo about her book, Wage Theft, which makes the clear and irrefutable point that American workers are getting ripped off by a lot of employers.  She told me that she was hoping this old school notion of actually enforcing labor laws, especially those designed to protect low wage workers would catch on as a national campaign.  She and Interfaith Workers Justice, which she directs are even close to unveiling a web tool they have been working on for quite awhile that would allow workers to easily determine whether or not they are getting ripped off and then act on it, but more details will have to wait until the testing has finished.

The long and short of it is that with regime change and a new Secretary of Labor coming, we finally may see some real enforcement and the economic impact for lower income families would be huge.  [You don’t want to hear about this, I know, but the figures and argument take up a chapter in the forthcoming, Citizen Wealth!]

In New York State, the Secretary of Labor has jumped to the front of the line with an announcement of a very innovative program that depends on community and labor grassroots enforcement mechanism.  This is an exciting pilot and breakthrough — and unions and community groups should pick up this banner and try to move this program nationally!  The details are in the following piece from today’s Times:

To crack down on businesses that pay less than the minimum wage, fail to pay overtime or to pay wages altogether, steal tips or commit other labor violations, the New York State Department of Labor is starting an experimental program that will rely on community organizations to monitor compliance with labor laws.

In an announcement, the state labor commissioner, M. Patricia Smith, called the program, the New York Wage Watch, a “one-of-a-kind grassroots tool in the fight against illegal labor practices.”

The six groups will conduct know-your-rights training, providing employers with information about compliance and distributing brochures to workers in supermarkets, laundromats, nail salons, day-labor sites and other work areas. They will have a designated contact in the Labor Department’s Division of Labor Standards, which enforces wage and hour laws, to whom they can refer violations or questions.

The department is to provide training and materials to the groups starting on Feb. 7.

After the first experiment in New York City and on Long Island, the Labor Department will seek additional groups for the program. The groups must be nongovernmental and nonprofit, and can include religious organizations, student groups, labor unions, business associations or neighborhood groups.

Ms. Smith said the program was loosely based on the Neighborhood Watch programs that began in Queens in the 1960s. In December 2007, she said, the Labor Department investigated a commercial strip in Bushwick. Two of the six groups now taking part in the pilot project — Make the Road New York and the Retail, Wholesale and Department Store Union — maintained a presence in the Bushwick area, staying in touch with workers and employers, and the number of labor-law violations went down, Ms. Smith said.

The Labor Department has documented numerous labor-law violations at a variety of workplaces in recent years, from restaurants and car washes to sites like the Saratoga Race Course and the Erie County Fair.

Amy Carroll, a supervising lawyer at Make the Road New York, said, “The Department of Labor can’t be in every nook and cranny of the city and the state all the time. We want employers to know there are costs for violating the law. They can’t get away with it.” 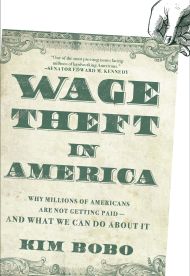