January 29, 2009
New Orleans                      It would be nice to say to the Right, “Hey, get over it!”  The Arkansas legislature failed to get a unanimous resolution of congratulations to President Obama, and throughout the last week the Google alerts have been filled with wildness that says the national community organization, ACORN, is slated to be almost $4.2 billion dollars of the new bailout bill working its way through Congress.

I know enough about ACORN, its members, leaders, and staff, to know that this is way past their wildness dreams and so far from reality that it’s hard not to simply grin about the whole notion.  The only way to think about this is the same way you daydream about winning a $100 Million in a lottery…fun for a second, but no way!

Media Matters performs their usual good service by actually bringing the facts to bear here and pointing out the pure fiction of it all.

Summary: The Hill’s Jared Allen repeated the false claim that ACORN is, in Allen’s words, a "beneficiar[y] of the stimulus package," and uncritically reported NRCC communications director Ken Spain’s false suggestion that the stimulus bill includes "a $4.2 billion bailout" for ACORN. In fact, the bill does not mention ACORN or otherwise single it out for funding. Additionally, the bill requires that the $4.19 billion it allocates for "neighborhood stabilization activities" be distributed through competitive processes.

In a January 27 Hill article, staff writer Jared Allen repeated the false Republican claim that the Association of Community Organizations for Reform Now (ACORN) is, in Allen’s words, a "beneficiar[y] of the stimulus package" currently under consideration in Congress. Allen also uncritically reported National Republican Congressional Committee (NRCC) communications director Ken Spain’s false suggestion that the stimulus bill includes "a $4.2 billion bailout" for ACORN. As Media Matters for America has documented, the bill does not mention ACORN or otherwise single it out for funding and requires that the $4.19 billion it allocates for "neighborhood stabilization activities" be distributed through competitive processes. Additionally, the Drudge Report linked to a January 27 FoxNews.com article that had the misleading headline: "Republicans Object to Stimulus Dollars for ACORN."

In the Hill article, Allen reported:

The National Republican Congressional Committee (NRCC) suggested Democrats are using the troubled economy as a way to advance their own social agenda, citing the liberal grassroots group ACORN and others as beneficiaries of the stimulus package.

"Spare us the phony press releases," said NRCC communications director Ken Spain. "So far the Democrats’ idea of ‘protecting the middle class’ has consisted of taxpayer-funded contraceptives and billions of dollars in ACORN-stuffed pork.

"It’s hard to decipher which is the most fraudulent notion — the fact that ACORN is a law-abiding entity worthy of a $4.2 billion bailout or that $1.1 trillion in out-of-control government spending is going to defy the experts and have some sort of immediate effect on the economy," Spain said.

The false claim that the stimulus bill provides ACORN with "a $4.2 billion bailout," which Allen allowed Spain to make unchallenged, is based on a misrepresentation of a provision in the bill that would appropriate $4,190,000,000 "for neighborhood stabilization activities related to emergency assistance for the redevelopment of abandoned and foreclosed homes as authorized under division B, title III of the Housing and Economic Recovery Act of 2008." The provision states that "not less than $3,440,000,000 shall be allocated by a competition" to "States, units of general local government, and nonprofit entities or consortia of nonprofit entities," and provides that "up to $750,000,000 shall be awarded by competition to nonprofit entities or consortia of nonprofit entities to provide community stabilization assistance." The $4.19 billion would be distributed by the Department of Housing and Urban Development’s Neighborhood Stabilization Program.

As Media Matters noted, on January 26, House Minority Leader John Boehner’s (R-OH) office released a memo that claimed "[t]he legislation could open billions of taxpayer dollars to left-wing groups like the Association of Community Organizations for Reform Now (ACORN), which has been accused of voter fraud, is reportedly under federal investigation; and played a key role in the housing meltdown." A January 23 release to which the January 26 document links stated that "the Democrats’ bill makes groups like ACORN eligible for a $4.19 billion pot of money for ‘neighborhood stabilization activities.’ "
These attacks related to the stimulus bill recall the false smear propagated by several media figures in 2008 that Democrats tried to create a "slush fund" for ACORN in the 2008 Emergency Economic Stabilization Act.
–E.H.H. 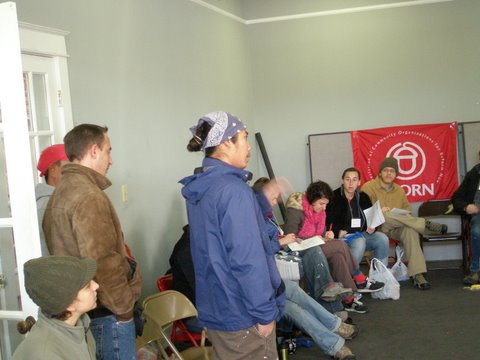