Dar es Salaam             There is no period like a world-wide recession to force home the point that globalism or the expanding benefits of for-profit enterprise is simply not going to solve the problems of the poor.  As unemployment grows like a disease and hunger fill new millions every day with hurt, the hopes pinned on doing nothing other than hoping that the economy would raise all boats are dashed on more and more hard shoals.

The substitute for globalization being the international fix is now the media’s search for the Holy Grail in hoping to find that for-profit companies can solve the problems of the world’s more than billion poor people.  If only business would believe that they could make money with the poor, then, “Eureka, we’ve found it!”

Two recent examples brought this to mind.  One in The Economist (1/31/09) tried to pump life in a story about a for-profit in San Francisco called Virgance that essentially was doing grass-tips campaigns for hire.  The other in the Times a week ago focused on the Danish company, Vestergaard-Frandsen, which really does seem like a remarkable company having re-envisioned itself into a much different operation:  “Its products are in use in refugee camps and disaster areas all over the third world: PermaNet, a mosquito net impregnated with insecticide; ZeroFly, a tent tarp that kills flies; and the LifeStraw, a filter worn around the neck that makes filthy water safe to drink.”  Indeed that is a company where one could be proud of the production.

But I was most struck by the quote below from the grandson of the founder, Mikkel Vestergaard-Frandsen though:

Very few rural Africans are willing to take AIDS tests because the stigma of even asking for a test is so strong. Mikkel decided to try bribery. Picking one health district in western Kenya, he offered anyone who would get tested a pack containing a net, a water purifier, 60 condoms and health education pamphlets.

Huge lines formed at the district’s 30 clinics, and nearly 50,000 people were tested. In one week, the percentage of adults in the district who had taken a test went to over 80 percent from less than 20 percent. Because testing was so centralized and fast, it included CD-4 counts, which are more sophisticated and determine whether someone is sick enough to start antiretroviral therapy immediately.

It was expensive — it cost the company $3 million. “But if I may be so blunt,” Mikkel said, “it’s the only demonstrable way besides door-to-door visits to get that response.”

He hopes to publish the data in a medical journal so donors can consider picking up the tab.

So, this is a for-profit model that depends on donors, but that’s not my point either.  I was interested in the recognition that as he discussed their campaign and its effectiveness, he also conceded that it was secondary to “door-to-door visits.”  This strategy for systematic community-based health services is exactly what ACORN International and its partners in GEHTS have argued is necessary to deal with health needs in the mega-slums around the world.

At the beginning, middle, and end of the day, any solution for the poor depends on aggressive participation on a door-to-door level, people-to-people.   Sitting here in the heat of Dar es Salaam, I wonder what it will take to hunker down and recognize that this very low-tech, empowerment and participation strategy, though not that sexy, just happens to be what works.  Let’s make that into a headline! 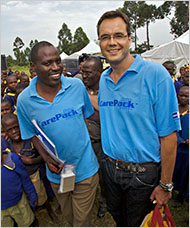 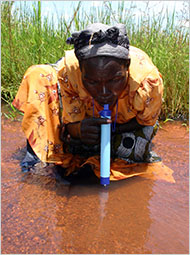