Puerto Playa        After more goodbyes and last minute meetings about plans and problems, we were off in a van offered by the general secretary of an island-wide, 50,000 member transport workers union that we were fortunate to meet our last night in Santiago thanks to one of the organizer’s ingenuity (props to Steffan Lajoie!).  This trip was smooth and quick sailing on the main highway rather than the picturesque mountain roads when we first journeyed to Santiago.  We had hoped to see the beaches on the northern coast of the Dominican Republic near Puerto Playa before heading off to the still chilly spring in Canada.
We were not disappointed.  The driver drove us through a gated, vacation community near the coast to a still public beach called Treasure Cove by the hopeful developers that was popular with Dominicans.  We were the only haoli’s.
The cove was beautiful.  The overcast sky made the water seem cooler than it really was for the first minutes, but once past a then band of rocks, probably planted for a meter or so as a beach protection, the sand was smooth under foot, the waves mild and rolling, and the water a blessing as a few of us took a swim.
Life is not a beach though, and the reminders were quick in coming in this idyllic setting.  The restaurant was run by a white foreigner, and he tried to charge for the banos, defeating the claim to easy living on the coast.  The souvenir shop was run by a Haitian.  The dishwasher in the restaurant was a Haitian woman.  Immigrants were unmistakably on the top and the bottom here.
The issue of migrant workers from Haiti into the DR is huge here.  We met at some length with John Service of the Catholic Relief Service about ways to partner to deal with workers’ rights issues for such workers when we met him in Santo Domingo on Friday.  We were all relieved to hear Katia Soriano report on the relative harmony in the neighborhoods between lower income Dominicans and Haitians living side by side.
Nonetheless it was not a surprise to me as I took my last walk around the beach to see that there was a recycler working along the edges of the crowd, picking up plastic, bottles, and whatever might be sold.   Of course, it was also a Haitian. 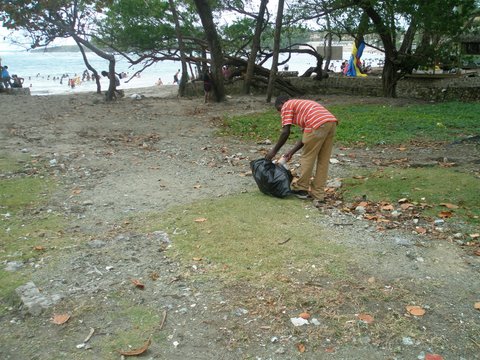 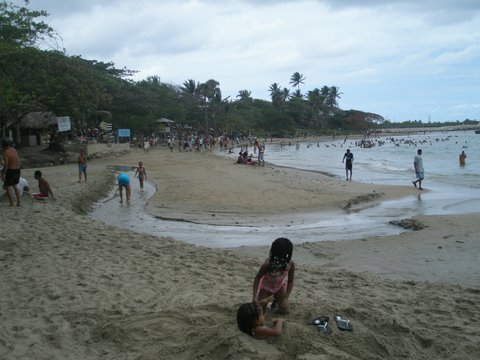 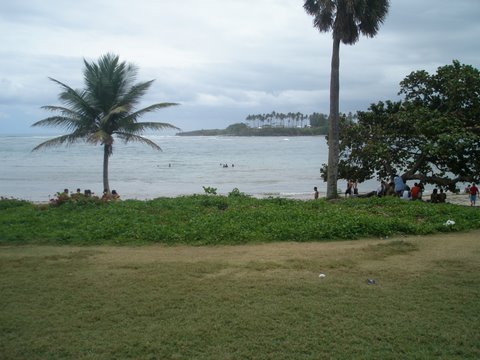