New Orleans        When is the Hurricane Katrina damage finally over?  Not yet for custodians of the Orleans Parish Public School System it turns out.  Most of them were contracted out and lost their jobs or retired after the storm.  Our union, Local 100 SEIU, now represents custodians at some of the schools through a subcontractor, but the cruel ironies continue it seems…
A reporter, Bigad Shaban from WWL-TV, called and is on his way over with a camera crew.  They got a tip and walked right into a warehouse in the eastern section of the city, which was heavily flooded, in the 9th ward near Almonaster Street.  The building was not locked and in fact was open in three or four places for anyone and everyone to walk right in.
Most troubling to us was the fact that on the floor open to all were stacks and stacks of personnel files for custodial and maintenance employees.  These files are highly confidential and included social security numbers, home addresses, and of course write-ups and reprimands.  Big trouble!
The Orleans Parish School System has obviously been working on an “out of sight, out of mind” policy for over 3 1/2 years, but as a union that represents workers there, this is a frightening disregard for the workers.
Ironically, had they not tossed away so many custodians at OPPSS, all of this mess would have undoubtedly been cleaned up years and years ago. 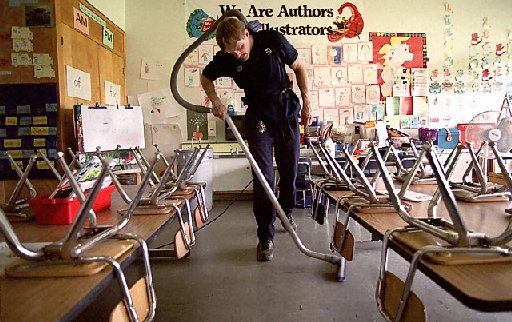