Toronto    Some of the most interesting meetings in my several days in Toronto were with our friends in the Canadian labor movement in Ontario, especially at the Canadian Auto Workers (CAW), SEIU Canada, and the Steelworkers.  There’s a hunger to organize in most of these unions even though several of them are getting hammered by the current economic implosion and watching membership plummet.  Nonetheless the organizers are open and anxious to talk about new ideas, innovations, and other things that might work in the future.
Our friend, Colin Heslop, who heads the skilled trades department of the CAW, was interested in developments in New Orleans where he and his people had helped us build houses, but it was also fascinating to catch up with him on the organizing developments in the unusual and groundbreaking deal that former CAW President Buzz Hargrove had made with Magma auto parts.  Despite the fact that the staff and national executive board had approved this very “different” kind of arrangement with Magma including the no-strike provisions in order to organize more than 30,000 workers, predictably this “concession” had been an issue in the election for Buzz’s successor.  All that was old news now, but the agreement with Magma had only netted about 1200 workers of the expected yield to date for various reasons.
SEIU Canada continued to be heavily engaged in pulling together the building service sector with growing campaigns in Ottawa and emerging efforts in Vancouver.  We had a fascinating discussion about living wage campaigns that are heating up in both areas and how this could feed into service-based organizing, as well as the usual wide ranging discussion about targets and opportunities.
With our friends at Steel, we visited briefly with Canadian USW president Ken Neumann, and then hunkered down with his EA, Ken Delaney, to continue another chapter in the discussions about new innovations in organizing that we had had with him over the years.  We caught up on the work with domestic workers which had interested us last year as well as other drives with taxi drivers and university workers which have solid legs.  Ken wasted no time recognizing that the last six months had been a blur where most of the time and energy had focused on stopping the membership losses in the mounting recession and blunting their impacts.  This had been like the classic “lost weekend,” where time had stopped since our conversations last summer and only now were our friends focusing on organizing again.
Saying all of that it was exciting to start making plans and brainstorming with our friends and allies again in Canada.  They were also interested and supportive of the informal worker organizing we are doing with ACORN International and the lessons we have learned from organizing along “majority union” lines in Wal-Mart.  I’m still predicting big things for labor in Canada in the months and years to come. 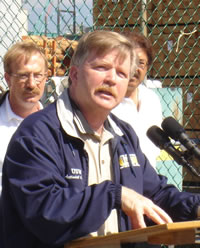