Hanoi The Organizers’ Forum delegation kept hearing about the distinctions

between unions, the government, the party, non-profits or NGO’s, and associations, all of which became clearer in our first meeting in Hanoi with the Vietnam Women’s Union, one of the principal associations in the country.  With 20000 staff at different levels and branches at every level, the VWU defined what the theorists used to postulate as the role of a “mass based organization” and its role in maintaining accountability, mobilization, and participation in a communist regime, though in Vietnam all of this is with a decidedly different twist.

The VWU is a membership based operation with dues about 25 cents per month and with over 10,000,000 members eligible to all women over 18 years old.  They exist as a specially chartered institution, much like the Red Cross and Neighborworks have special charters from Congress in the US.  They are guaranteed a meeting with the Pri 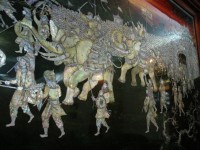 me Minister or the deputy Prime Minister every other year to push for their big “ask” in legislation.  Their job is to advocate and review and sign off  on everything involving women.

They also lose some.  We hear about the difficult fight they have had with the National Assembly to equalize the retirement age between men and women, so that women can achieve more equity in elite and senior positions in ministries, the Assembly, and workplace.  This one surprised some of us, since when first hearing about the earlier retirement age, I had thought, good deal.  The VWU put another spin on it entirely.  They had gotten the proposition through all of the levels but failed to get a majority from the Assembly.

The VN Chamber of Commerce and Industry is another pea in this pod whose role is to advance and advocate for business.  Many of our delegation kept referring to them as the Chamber.  They have a membership of a couple of hundred thousand businesses.  Mike Eso from BCGEU and the head of the Victoria (BC) Labour Council pushed the representative hard on the need to index wages to inflation and have businesses accept the equity, and the silky smooth C&I guy ended up finally, as so many of us have heard so many times, telling Mike that this was an area where we needed to admit that we could not agree.

Surprisingly both of these associations in the new market-based economy of Vietnam were hustling for support.  Commerce and Industry was trying to develop a bureau to expand CSR (corporate social responsibility) to soften the image and fund its programs.  The VWU engaged us extensively about donors, especially Atlantic Philanthropies based in the US, which had just given them their first grant as a lead agency to put in a $3.6 M program of emergency preparation in four provinces over four years.

It’s all different and clearly these outfits have to work out their own paths with the government and the party, but it

was also clear that “it’s a process” with real struggle and argument, winners and losers, and now a lockstep operation.  We didn’t get a clear look through the window, but we could still see how fingers were getting smashed as the associations aggressively advocated for their members.