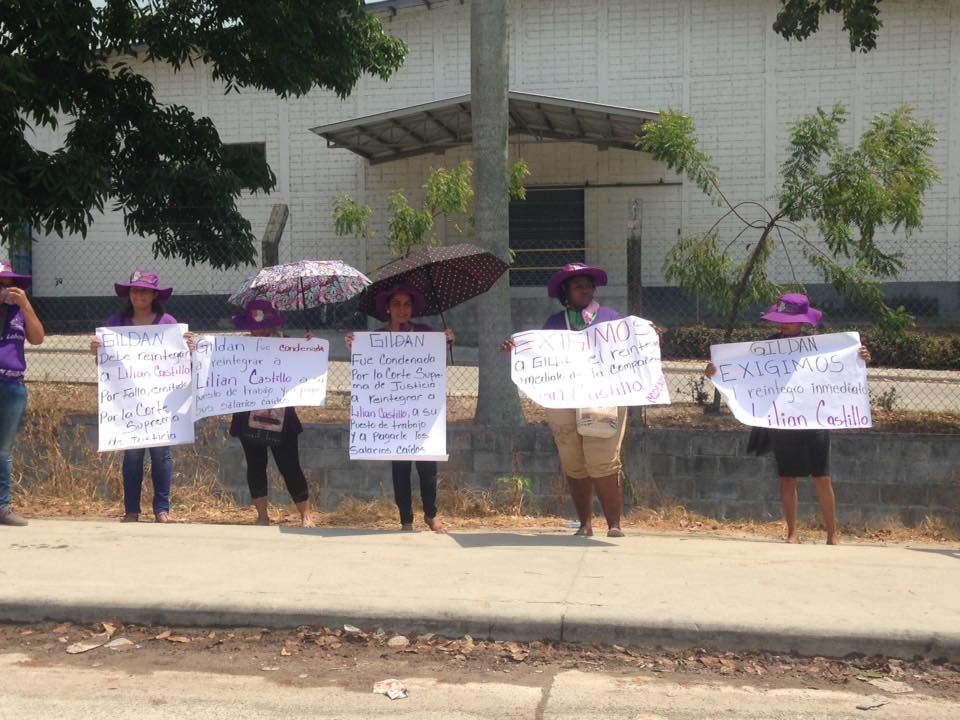 Protest outside a Gildan plant in Honduras after a worker gets fired.

San Pedro Sula     ACORN in Honduras has almost one-hundred members in the town of El Progresso, one of the many maquila centers for out-of-country manufacturing companies on the outskirts of San Pedro Sula and this area which is the industrial heart of Honduras.  Since the biggest employer is Gildan, the Montreal-based t-shirt and textile company with a 1300-worker factory in town, not surprisingly some of our members work there.

After some chaos with directions, I found the union offices of FUSEP Sindicato SITRASTAR that represents workers at the El Progresso Gildan plant.  Of the fifteen Gildan plants in Honduras, I learned that the El Progresso plant was the only one with an independent workers’ union.  There are three others that were described as having company unions, leaving eleven with no representation.  Gildan has 24,000 workers in Honduras of its 42,000 globally, so this is a huge center of their production.

Wikipedia makes the comment – without sourcing – that Gildan’s practice of fast lines and low pay allows them to undercut Chinese factories.  Maybe so, maybe no.  Gildan’s global footprint seems to map the textile industries race to the bottom for wages with plants elsewhere in Vietnam, Bangladesh, and Haiti.  Abuses at the factory in Haiti has attracted the attention of the Workers Rights’ Consortium (WRC) in several reports.

Union officials told me that they had recently signed a new four-year agreement.  Their situation was better than what they understood from talking to workers in other plants in Honduras, but there was no bragging about the contract.  They clearly had felt like they had signed the contract with a gun to their heads and the threat of the plant closing if they didn’t accept the terms.  Unless I misunderstood, they had ended up with a reduced and conflated piece rate, mandatory overtime, and a line speedup, much of which was imposed unilaterally. Heads were shaking without smiles over these developments.  Carpal tunnel and repetitive motion problems were rampant from everyone’s reports.

And, these were the workers that had it best in Gildan Honduras!  We spent a long time in the meeting hearing about reports from other plants in the north, partially around Rio Nance, where Gildan had an even larger concentration of factories and workers.  There were rumors that WRC was in contact with the company about these conditions and waiting for a response concerning various abuses.  It almost goes without saying that I heard numerous reports of plant activists being fired for beginning to organize in the factories.

This is the devil and the deep blue sea in lower wage worker exploitation.  24,000 jobs is huge in a country like Honduras.  A threat to pack up and move to even lower wage countries is impossible to ignore, because that has been the sordid tale for most of the textile industry, not just Gildan.

For our own members and these workers, ACORN and our allies will have to see how we can stand in solidarity here.  In a month when ACORN Canada is meeting in Montreal, this will be on the agenda.  Nonetheless, it’s a stacked deck with few good cards to play in our hands.