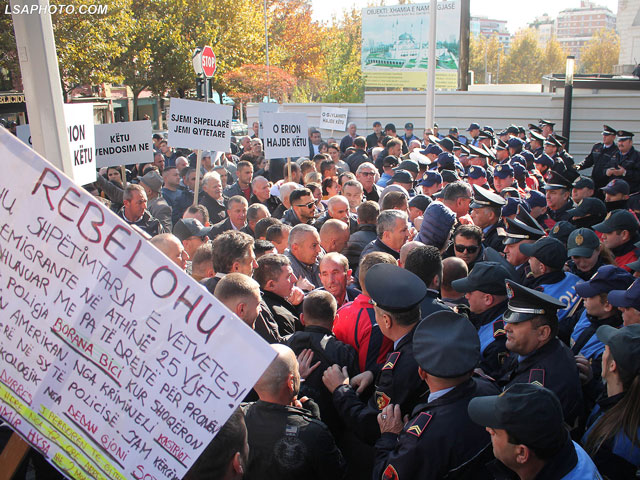 Tirana       Leaving Frankfurt was easy and painless even in the early dark rush hour.  My kind host accompanied me all the way until I had my ticket in hand at the counter in the giant airport.  It may not have been necessary, but it was nice to simply be a sheep in the herd on my way, rather than trying to figure out which train, which stop, and the whole shebang.  I was encouraged in Germany.  Exciting possibilities in an exciting time in the country for organizing.

Getting in and out of Tirana, the capital of Albania, isn’t easy.  I had thoroughly investigated buses and trains both from Frankfurt and then ongoing to my next destination in Sofia, Bulgaria.  I’m exaggerating to say that you can’t get “there from here,” but it isn’t easy for sure.  There were no direct trains and any that would take you in or out would take you forever and on a peculiar and circuitous routes through Greece or other countries.  Buses were the same.  It was almost as if they would stop in the middle, give up the ghost in Skopje, Macedonia, and hope someone would come fetch you some day in the future, depending on when the snow in the mountain passes.

So, the only easy option is flying and in that case it’s a puddle jump to end up in the capital of Slovenia which is spelled Ljubljana, and may or may not be pronounced Ljubljana.  The Frankfurters laid down a challenge for the next time we meet for me to spell, Ljubljana, which will be easy, so thankfully they didn’t bet me on saying it correctly.   On the other hand, the flight, even though bumpy, into Slovenia was gorgeous.  Looking out the window for miles there were row after row of beautiful jagged, dragon teethed, snow covered mountains until we landed in the plane where the small capital is situated.  We left the plane, went through passport control and then were at the gate to Albania without having to reenter security, which seemed strange, but given that half of the waiting crowd for various gates was composed of the military, no one seemed to mind.

Landing in the wind and rain, I have no clear sense of Triana yet.  We made it through traffic to one of the inner road loops that circle the city center like rings of Saturn, though that wasn’t exactly the description of the experience.  There had been protests and road blocking on the main road into town.  The government wants to expand the road, but the problem of confused property rights given the on again, off again rule under Communism and now the current Socialist government meant that many had been living for decades not exactly as squatters but without title and facing counterclaims from previous owners.  Now everyone is in the same stew as the government exercises imminent domain and feels the need to compensate no one.

Once the clouds clear, and we get around and about, we’ll try to sort out what is really happening in Albania, for now, we’re as confused about up and down and all around, as the government and these beleaguered, and now, homeless, families are.