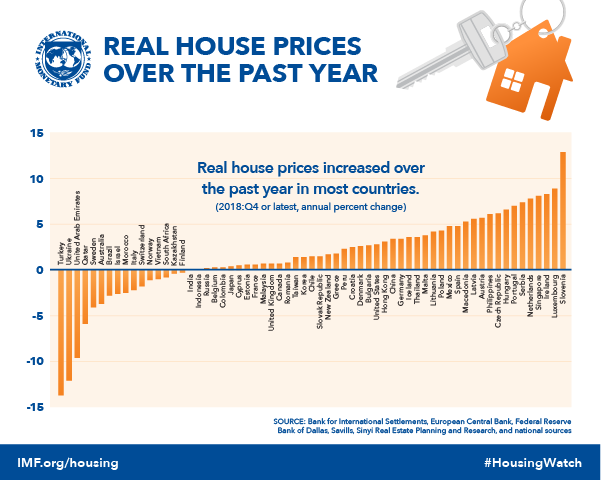 New Orleans    Housing is important enough that it can trigger a worldwide recession, especially if the market bursts first in the United States, as we all found in 2007.  Ironically, it is not important enough that data on housing prices, much less rents, is included in general economic forecasts from the worlds’ main financial bodies like the International Monetary Fund or the OECD.  We know on the streets of cities around the world that prices are rising, but there isn’t an easy way to put the pieces together other than through the stories we tell ourselves and hear daily.

The Economist does try to keep the data and recently published a chart based on an algorithm they had developed on housing prices from various major countries.  The bottom line is that prices are hitting new highs in many countries, and the trend indicates that there is still room for them to keep heading for the ceiling.   Globally, home prices on average are nearing the level before the bubble popped, and considerably higher in some countries, like New Zealand, Canada, Australia, and Germany.  The Economist found levels in the United States, Britain, Ireland, and France nearing the marks they hit before the recession.  Spain still has a way to go but it’s out of the trough.  Only Italy in the countries charted continues to still trend considerably downward.

Perhaps that’s good news for the general economy, but that’s not good news for affordability either in purchase prices for home ownership or of course for tenants experiencing escalating rents.  The Wall Street Journal speculates that prices are now moving new ownership, especially millennials from the recent project of back-to-the-city, and often accompanying gentrification, to nearby suburbs.  They found that fourteen of the fifteen fastest growing cities with populations over 50,000 in the country are in fact in suburbs, albeit they are near large cities like Charlotte, Atlanta, Cleveland, and the like.  Places like Apex, North Carolina, fifteen miles from Raleigh, Frisco Texas, near Dallas, and Buckeye, Arizona near Phoenix are on the list.  Affordability – and good solid public schools – seem to be driving a lot of the migration, both from migrants from even more expensive cities on the West and East Coasts, and from the cities themselves as younger families search for middle-class amenities for growing children and their own aspirations.

Reading all of this I thought of an essay I read recently by the novelist and essayist Marilynne Robinson entitled “City on the Hill” in the New York Review of Books.  In defense of the Puritans and their role in colonial life and American traditions, she reminded readers that they were fleeing not only religious persecution, but the English Poor Laws, that had created a society with only two classes:  rich and poor.  Current housing trends in pricing and rent, may duplicate such a society in major world cities, especially in North America and Europe, where there are only the rich and poor.  The rich because they can afford to live in the cities, and the poor because they have no choice.