Doha      All Saturday and Sunday, the ACORN India team and I kept the conversations going as we continued to make progress.   We debated adding a website.  We dug deep on accessing our community radio access through AM/FM and acornradio.org with commitments made to produce weekly shows on a fixed time, as well as exploring the issuing of noncommercial licenses in India now and where we might find partners.  We scheduled a regular team call-in the first Wednesday of every month.  We updated our WhatsApp group.  We planned our next meeting in Sri Lanka with the 2020 Organizers’ Forum, as we ticked off one box after box.

As we plumbed the depths of one campaign after another, the victory on electricity rates in Delhi, the expansion of our hawkers union in south Asia, our path-breaking on the intersection of climate and housing issues in Dharavi, we couldn’t help circling back again to our huge potential and confronting our capacity issues that were preventing us getting to scale, especially given the size and importance of India.  There was no question that we were doing a lot, but it was with a little, keeping us from converting more of our successes to their full potential. 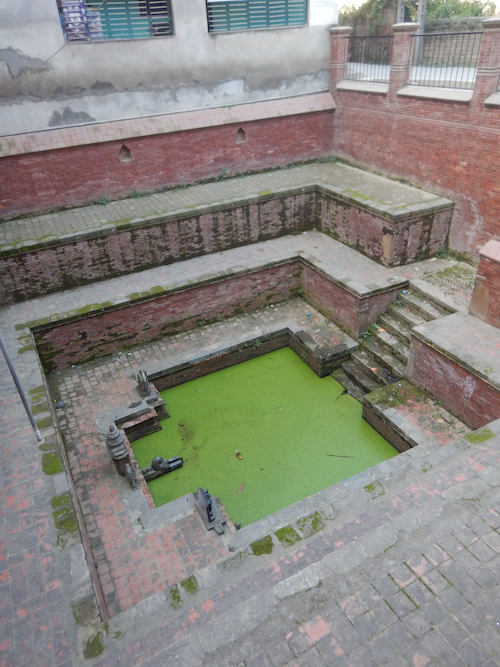 one of the old pools for bathing, water, and rest

The Hawkers Livelihood Act is one good example.  There are more than 300 cities where the Act has not been fully implemented.  We did some mental white-boarding on just the number of food vendors that were a small subset of this informal vending workforce.  Quickly we had a national number of 2.5 million food vendors.  There was a requirement that each of them be certified in food safety, which we were qualified to provide.  We started fleshing out a pilot program where we could certify and train 10,000, with 1000 vendors each in 10 cities, allowing us to expand through both a servicing and organizing model.  We planned to mobilize the research and see if we could perfect a proposal.  It was exciting and doable, but a cloud hung over the discussion when it came to where we might shop such a proposal to win support to build the capacity.

Organizing vendors on the ground to take advantage of our growing numbers in Delhi, Chennai, Mysore, Bengaluru and elsewhere while we are inundated with organizing invitations was another conundrum.  We sketched out the details on registering the union in other locations and doing so as a national union of informal workers.  Thinking about the local in the United States, the growing effort in France, even our tenants’ unions, we concluded that we would also form and flesh out the structure and governance for a global federation.  Heady stuff.  Realistic plans.  Could we convert the plans to scale?  Once again, we were stumbling around the question of capacity.

It’s the old story of organizing — it was a great meeting, but the real test would be how much of the talk we could convert into action. 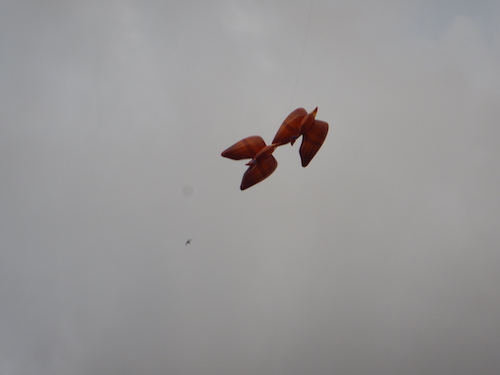 kite flying is common…2 eagle kites in the air Bengaluru   I had a long list of things I needed to get done on this trip to India, catch up with Dharmendra Kumar in Delhi on our progress at blocking multi-brand retail in Delhi and stopping foreign direct investment, state by state, and evaluate our growing, alliance with hawkers, and my coming visit with Vinod Shetty in Mumbai will focus on our progress in Dharavi and see the developments in the sorting system for our wastepickers were vital.  But, none ranked higher than visiting with Suresh Kadashan and seeing if we had finally succeeded in forming official, registered unions for the informal workers we were organizing in Bengaluru.

The organizing was certainly not new.  We had been plugging away at it for about five years with wastepickers, hawkers, domestic workers, and others, but eighteen months ago our decision had been to bite the bullet and register formally as an independent trade union under the laws of the state of Karnataka, where Bengaluru with about 5 million people is the capital and largest city.  The rest of the world may know Bangalore by its old name and its reputation as India’s tech center or as “silicon” city, as some of the boosters are saying now, but that’s another world from our organizing with slum dwellers and informal workers. But every month we would try to register and could get no decision, and this went on, frustratingly, for over a year until this last December, when finally a deputy labor commissioner agreed to a path forward.  Winning the registration was a matter of signatures from members and producing a minimum number (150) at a meeting of the street vendors.  We now have organized the vendors in 25 different street markets throughout the city and once the process is finalized in coming months Suresh expects we will find ourselves with 6000 new dues-paying members.  I was with Suresh yesterday as we bussed and auto-rickshawed to various street markets to meet with the officers of local branches of our new union in several places. I also got to watch him have an impromptu noon meeting with 35 vendors on a side street market that needed to come into the union in order to fight for space under the Metro since a bridge was about to displace them once construction began.  It was exciting to watch a small plastic tarp spread over nearby dirt transformed into an organizing meeting!  Already our fledgling union has successfully filed cases against police harassment of vendors based on protections for sellers that are included in the state constitution, giving hard pressed hawkers some spring in their step.  In the meeting as well, Suresh dramatically pulled out the application papers for a national pension scheme that could provide small retirements for our members after 60 based on a 2:1 match annually that, importantly, has to be certified by the official seal of our union. Registrations for a wastepickers union floundered, when the city privatized wet and dry garbage pickup, but we’re watching that situation closely.  We’ve also now filed for a local union of street food preparers which could yield another 2000 members, once approved, and, yes, India is the home of the craft union, more than the industrial model, as you can see.

Opportunity within the informal sector abounds.  Leaders estimated 130000 street vendors ply their wares in Bengaluru and perhaps a million-and-a-half are vendors among all of Karnataka 61 million people, but in this huge state, that’s still a bridge too far perhaps since 10 of the 15 districts would have to organize in order to win a statewide union charter.

Big dreams and hard work, yield big dividends, and finally our new union is alive and growing in Bengaluru, but that also means even bigger dreams and harder work lie ahead of us in the future.  It was thrilling to be a part of it all!