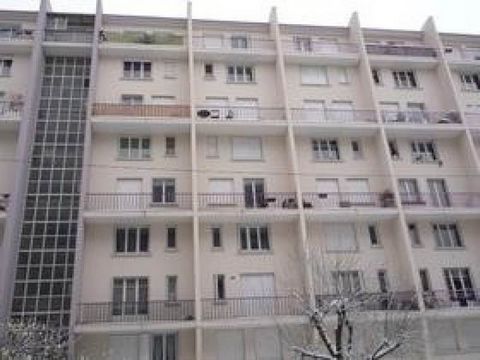 Grenoble   On my whistle stop tour of almost all of our offices in France and the United Kingdom, of course my first stop had to be in Grenoble.  It seemed like I was in store for a heat wave as the temperature was predicted at over freezing for my first time in over a week.  Instead as I left to catch a tram and bus to be part of an action by ACORN’s affiliate, the Alliance Citoyenne, it felt even colder, as I trudged through freezing rain in the most miserable weather to date. Adrien Roux, the head organizer of the Alliance, shrugged as we all gathered across the street under an overhang to assemble, saying the horrid weather made the point, since our demand was for new windows to replace the old wooden sashes in this public housing project which let the wind into the units in freezing gusts.  Many of the members had wrapped blankets from home over their winter coats to make the point, and they were glad to have them in this weather.  One of the organizers had brought a fox stole which various leaders tried out.  Telling the story to an organizer in the States, she said, “how French!”  Repeating her line to all of the French organizers later, they said, “we thought it was so American!” The action was at the regional housing authority office that was responsible for social housing in that district.  We had won on this issue the year before at another housing project, but still when we hit the door and all 25 of the members crowded around the front counter, the staff of the agency seemed surprised and couldn’t control their outrage, just adding fuel to the fire.  One man at the counter, egged on by the staff, started yelling at the members, and when Adrien moved to calm him, he briefly shoved Adrien, and the members surged forward in a wave of their own anger.  Managers finally regained their composure briefly, allowing almost everyone to go to a conference room to hear them out.  I stayed in the waiting room with half-dozen of the leaders from other projects, and for over an hour there was a constant tag-team argument and shouting match between the counter staff and our leaders, as they continued to rail in displeasure at our tactics. Inside it was much the same in the beginning, but I could see clapping finally through a space in the window, and a bit later the door opened after more than an hour of negotiations and I could see many of our members moving to leave.  Much of the press had remained waiting to hear the results, and no matter the agency’s shouting, we walked away with a victory when they committed to inspecting each of the apartments immediately, and then moving to replace the windows in any that were not blocking out the cold. breaking up the negotiations At noon suddenly, metal gates came down all around the housing authority building blocking any entrances as the agency shut down for an hour-and-a-half for lunch, barring all tenants from entry.   How French!

Our debriefing was quick, even though the rain had stopped and the sky was partially clearing.  People were excited, and there were plans for an evening meeting of the Grenoble board to discuss the victory and plan for next steps.  How ACORN! debriefing with key leaders after the action by Adrien Roux celebration with Grenoble board later that evening…”let them eat cake,” so we eat cake!