New Orleans     In recent weeks the conservative, communalist Indian government led by Prime Minister Narendra Modi has taken steps yet again to attack nonprofits, especially those with any extensive ties to foreign donors.  Technically, these were changes in the law for those organizations registered under the FCRA, the Foreign Contribution Regulation Act, but they are part of a larger political agenda that had been part of Indian politics for decades and has also become a more intense attack on what remains of India’s historic commitment to a diversity of religions and freedom of political expression.

Several years ago, the highlight of the focus was the attack on Greenpeace, largely for its opposition to a giant coal-fired plant near the megacity of Chennai, but that was just the point of the spear.  Thousands of nonprofits were delisted at the same time, ostensibly for technical issues, but it was hard to disguise the pattern.  Visas were refused to many attached to nonprofits.

The new version of the FCRA is more draconian and chilling.  All organizations with an FCRA registration will now be required to establish an account at the State Bank of India through its branch in New Delhi, and all financial activity is restricted to that account, so that the government can monitor it fully.  Administrative expenses that were allowed to be 50% of the grant were dialed back to 20%, largely in an effort to restrict the level of compensation that nonprofits staff might be receiving via foreign grants.  No sub-grants from an FCRA qualified organization may be given to other organizations, including nonprofits that are properly registered in India to only accept contributions domestically, nor can there be a re-granting of money received by an FCRA nonprofit.  The new law does allow an organization to surrender their FCRA number, but the assets will be transferred to the appropriate governmental agency.  Any new staff or board members will to give their Aadhaar details, which is the 12-digit biometric number containing an Indian’s full set of demographic details, which is also chilling.

The headliner this time around has been Amnesty International, which has indicated that it is withdrawing from India because of harassment by the government.  Amnesty had tried to recast its operations as a private corporation rather than FCRA qualified, but the government blocked that path as well.  Observers in India note that in the hyper-Hindu focused BJP government much of the attack is on religious funding and affiliated organizations as well.

The fear of foreign funding isn’t new in Indian politics.  Indira Gandhi shut all such funding off when she declared martial law from 1975-1977.  In an amazing unprecedented and never repeated decision, Misereor, the funding arm of the German Catholic Bishops, granted a community organization in Kolkata the equivalent of more than twenty years funding in advance before the cutoff.  Times change.  A report from the US-based Council of Philanthropy carries the cutline:  Until new rules are released by the Indian government, current guidance from legal experts recommends that all funders cease making grants to India.

Estimates from India-based think tanks believe these actions could push 100 million Indians back into poverty.  Others express amazement that the new coalitions and inputs from donors to offset the pandemic’s effects in India will be undone.  The consensus seems to be that these actions are another step downward in India’s reputation as a secular democracy.  Certainly, the new law seems to have much in common with the actions taken and the threats perceived by authoritarian governments around the world over the danger of nonprofits to their power.

Katmandu       Having not been able to meet with the ACORN India team for over three years given my inability to have my 10-year visa renewed, I was curious about what I would hear from their reports after my long absence on the ground.  Would we have made progress or just run in place?  The rightwing, communalist and hyper-nationalist government of India under Prime Minister Modi was a wave of resistance against the progress of our work in mega-slums like Dharavi in Mumbai and lower waged workers in Bengaluru, Chennai, and Delhi.  It was exciting to hear where we had jumped by leaps and bounds once the reports began in our first full day and a half of meetings, and where we still faced huge obstacles at every turn. 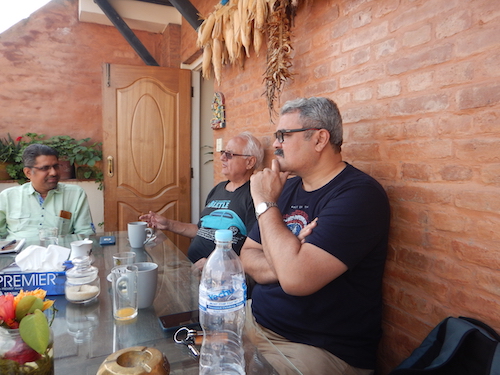 Perhaps the most significant victory was less than a week old in Delhi, where ACORN’s Dharmendra Kumar and our members had been fiercely lobbying the Chief Minister, who has become a sometime ally in our work there.  The campaign and victory are reminiscent of the Lifeline utility fights ACORN waged in Arkansas, South Dakota, and other states in the 1970s.  The Delhi government offers electricity subsidies for low income residences using between zero and 200 units of electricity where they pay less than 50% of the bill and between 200 and 400 units where they only pay 25% of the bill.  Over 400 units or kilowatts, the rates accelerate quickly.  ACORN noted that these breaks only benefit the meter holders, often landlords, and not the low-income tenants.  Since the landlord had multiple units, the single residential meter would show considerable use of electricity, meaning that lower income tenants were therefore paying the highest possible rates for usage.  We finally won a victory here when the government capitulated and ordered the sub-meters to be put in the names of the tenants, providing them the full subsidy that others were receiving.  Realizing that landlords will still drag their feet and resist these changes, Kumar and ACORN believe this could be a huge opportunity for ACORN to extend out work of building community organizations throughout the city.  The general progress in Delhi on many fronts filled many pages in my notebook, as I scribbled to keep up with all the news. 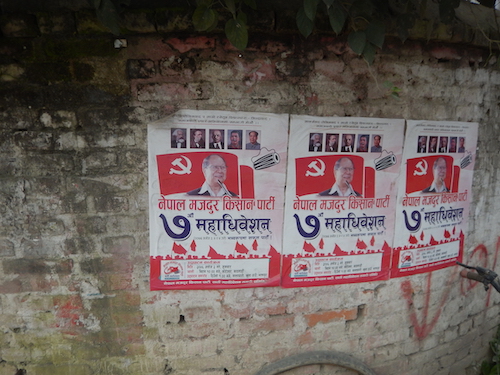 current political poster…how often do you see Marx, Lenin, Stalin, and Mao on an election poster?

In Bengaluru, Suresh Kashidan reported that he had failed to push the membership in our hawkers and street vendors union to 50,000 as he had hoped, but we had boosted it by 10,000 members to 45,000 now.  Bengaluru was largely holding its own, but Chennai in neighboring Tamil Nadu has added three thousand to 8000, and Mysore in southern Karnataka was a breakthrough with 8000 members.  The Hawkers Livelihood law has been implemented in backwards fashion with the town committee still not elected and the zones not totally sorted, but the process of licensure has been implemented with almost 15,000 hawkers licensed out of the 24,000 applications.  Suresh has identified and documented 130,000 hawkers, so it’s a slow road.  We are enabled to enroll people for the ID and into the social security scheme in Karnataka which is helping us grow the operation as well. 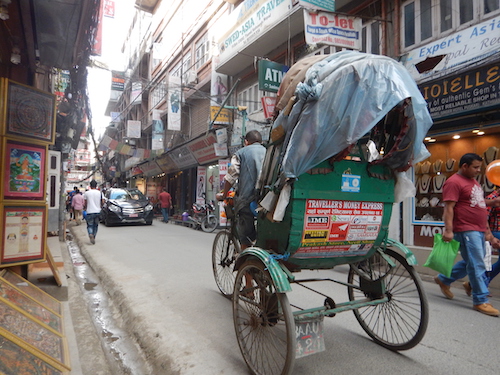 In Mumbai our Dharavi Project has managed to make inroads with its program into various corporate responsibility programs and can count a coup in now doing all the recycling in the Bloomberg building as well as adding other companies.  ACORN is also running zero-waste programs at several big trade gatherings including ones organized for big recycling companies by a German firm.

Believe me, this isn’t the half of all I learned, forcing me to consider how we can double down in India to increase the scale. 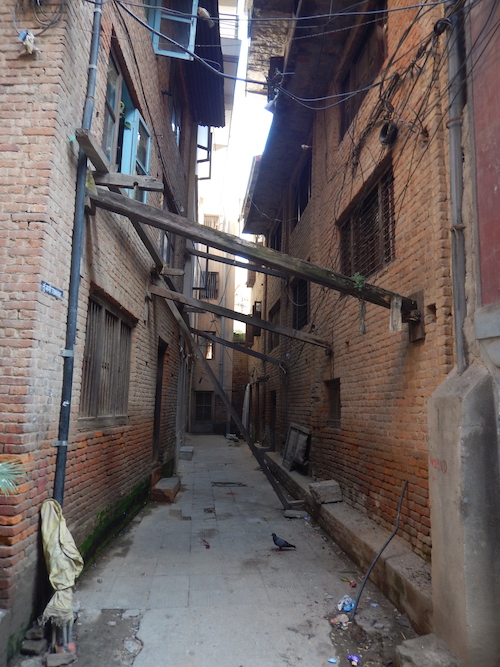