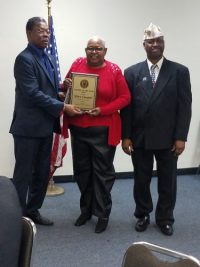 New Orleans    Finding myself in New Orleans, I accompanied my companera to the Honor Awards night of the district council of the American Legion.  Debra Campbell, a key leader in ACORN’s affiliate, A Community Voice, and co-chair of the Upper 9th Ward chapter, was receiving their award as Citizen of the Year.  The crowd was small, but the tradition was large.  A chair was set out for POW/MIAs.  There was prayer at opening and closing.  The pledge of allegiance saw hats off and hands on heart.  Debra was magnificent, as was Rev. Richard Bell, the Legion’s adjutant, and co-chair of ACV’s Lower 9th Ward group.  There was a lot of talk about leadership, which I found interesting, even if not surprising.

Some of the concerns about leadership are implicit critiques of President Trump.  The New York Times editorial focused on the way General Martin Dempsey, the head of the Joint Chiefs of Staff under President Obama, seemed to be tweeting leadership tips in the hopes that they might influence the President.  Good luck with that, eh?

I have been paying more attention to these comments and examples, while preparing for the leadership training sessions in Milwaukee with newly elected officers of Amani United.  The military does leadership-talk constantly, but that might not be a recommendation for source material, despite their experience.  To some degree leadership is out of vogue.  There’s a lot of talk out there these days about flat-leadership systems or even leaderless formations.  For example, the French government has been pulling its hair about how to negotiate with the Yellow Jackets who are militantly refusing to identify a leadership structure for their movement.  The media worked hard to anoint leaders for #BlackLivesMatter, the Women’s March, and even Occupy with various levels of success.  Some seized the mantle and others ran from it.

I stumbled onto a book, How Change Happens:  Why Some Social Movements Succeed While Others Don’t by Leslie Crutchfield based on work by a center that looks at these issues at Georgetown University.  Part of their argument was impossible to swallow, like their habit of equating the achievement of some major social changes with their definition of what were social movements, or their view that when corporations were forced to adapt to pressure and larger social changes and watershed events that made business in fact leaders.  Nonetheless, there were some interesting quotes about leadership, regardless of the context, that I thought would be useful in the training sessions.  Crutchfield also argued that success for social movements was greater when they were more focused on the grassroots up, than the other way around which was spot on.  Another direct hit was the need for organization’s and movements to be something called “leaderfull.”  It’s an awkward term that gets sort of stuck in the throat as it comes out, but the bottom line is indisputable.  An organization with more leaders at all levels with the ability – and coordinated autonomy, as I’ve always called it – to operate actively and powerfully has the best chance of success.

Leaders matter.  It’s worth the work to spend as much time as we can to help them develop to their full potential, just as we see with Debra Campbell and Richard Bell.  A lot to learn and a lot to teach.

New Orleans       With all of the deserved celebration and whoopsie-do about the historic diversity of the newly elected Congress, talking to Sayu Bhojwani, the founder and director of the New York-based nonprofit, New American Leaders, on Wade’s World seemed as right on time as these new representatives themselves.   Sayu made some interesting points that underscored that this election was not a combination of magic and miracle, but the result of years of grassroots work in communities and by the candidates.

The topline is well-known at this point.  The new Congress is the most diverse in American history.  Two Muslim women, the first, are now in Congress.  Two Native Americans were elected.  Latinas from the left and middle gained seats, including the youngest woman ever to be elected from the Bronx.  Donna Shalala, former Cabinet secretary and president of universities in the Midwest and the South, was the gerrymandering of the new gang and elected as a freshman Congressman from Miami.  Expectations are high!

In our conversation, as well as in her book, People Like Us:  The New Wave of Candidates Knocking at Democracy’s Door, Sayu underscored the points that let to the election of new bellwethers of change like Ilhan Omar, who became the first Somali-American to be elected to Congress representing the 5th District of Minnesota.  She didn’t come out of nowhere to suddenly be elected.  She ran campaigns for other candidates elected to her state’s senate and the Minneapolis City Council.  She served as a policy aide, a health and nutrition worker, and as head of a national nonprofit advocating for immigrants from East Africa living in the United States.  By the time she was elected to the Minnesota house, she had paid her dues in grassroots politics, preparing her way to move up when Keith Ellison, who had been the only Muslim in Congress, stepped down.  This theme came up again and again in Sayu’s book where races for local school boards, city councils and state legislative seats against all odds had taught old lessons in grassroots politics to new leaders who kept challenging and running until they won.

Part of the backstory is obviously changing demographics challenging an older generation trying to hold on.  Sayu is unforgiving about the replacement of a veteran woman who had been office for 44 years by a younger woman representing the new majority in the district.  She thought perhaps the older war horse had been a progressive in her time, but she had settled into a liberal rut, allowing a new progressive to step forward now.  Sayu is equally unapologetic in her advocacy of term limits to make room for new leadership.

Small donations beat big money.  New communication methods have been easily adapted to modern campaigns by new leaders.  The need for more equitable redistricting and the end of gerrymander would be critical in allowing the next generation to move forward.  If Sayu is right, what we are seeing in the new Congress is not an exception but another leap forward in the changing of the guard to new leaders with profoundly different and more inclusive views of America’s future.