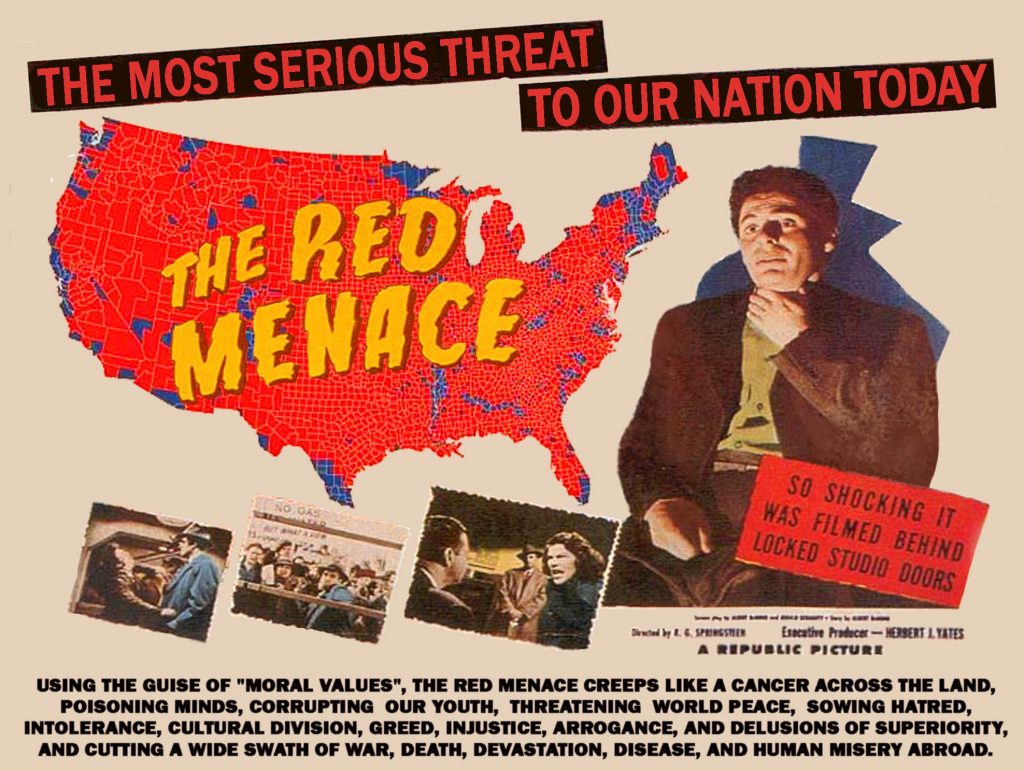 Chicago   It used to be a daily thing, now, thankfully, sometimes weeks will go by without some rightwing troll hurling a word bomb my way.  I read them sometimes, if I’m not familiar with the author in order to see if there’s a new twist or something imaginative in the effort of insult.  For me, it’s water off a duck’s back.  I’m mainly interested in what it says as a signal to his tribe, a dog whistle to the pack he wants to follow him.

Recently there was a new twist on this old theme on a website called “front page,” I think.  The author, whoever that might be, was trying to cook up some conspiracy involving me, Wade Rathke, as an instigator of Occupy, which I guess I should perhaps take as a compliment, though I’ve often commented that the story of Occupy is the time a “tactic swallowed a movement.”  Anyway, he referred to me as a “neo-Communist.”  Is that a thing?  And, if so, how interesting is that, and what should we make of it?

Red-baiting has been a “go to” move since its heyday in the 1950s.  But, being called a “commie” is such a last century, conservative trope that you don’t see if much even in most rightwing screeds.  In fact, it’s more common that they call people “socialists” now in the US, where candidates for president in the Democratic primary are sending their own smoke signals by either signing a verbal pledge of “say it’s not so,” or going silent and seeing if this also shall pass.  Of course, one of the reasons you don’t see a lot of finger pointing, name calling redbaiting anymore is simple:  what’s a communist anyway?  Do they live in Russia or China?  Hmmm, not really, except in the same technical way that we might call America a democracy, we might call them communist countries, but they are almost more rapaciously capitalist than most of the rest of the world’s country club.

But, a neo-communist, that’s somewhere between fish and fowl, compliment and condemnation, it would seem.  There are a lot of people searching for a unifying political and economic set of theories and principles adaptable to modern times or with luck, even coming generations.  I’ve met many in Germany and the United Kingdom among young activists who are such seekers, and I’ve enjoyed such discussions and see all of them as fellow travelers hoping to find a sure and sturdy road to the future.

With a super troll, twitter fiend, name calling bully in the White House and at loose around the world, it must be hard for old school conservatives to figure out a way to top that.  I don’t feel sorry for them, but I recognize the dilemma.  How do they compete when they are getting their hate on?  It must be maddening!

Meanwhile, the rest of us better keep working on something “neo,” because politics is evolution too.  It’s adapt or die or at least disappear in irrelevance, looking around to see where the people are and finding yourself all alone, as many of these conservative pundits have discovered.

Words have meaning and value, but thrown in the wind, they truly can’t hurt us.  We keep working, and we can even build something with sticks and stones, if people are with us.

Victoria   We are hardly more than a week until the USA Presidential election and predictably the conservative rightwing is pulling out the big guns and narrowing their sights for the kill, but surprisingly many are still aimed at ACORN, now almost two years gone.  Sure, it’s not as bad as it was four years ago.  One long screed I read this weekend even bemoaned the fact that ACORN did not come up in the debates between Obama and Romney as it did last time, but it’s pretty amazing how much hating on ACORN and grinding their teeth on the organization is still commonplace on the whack right.

For some of these commentators, almost of all of whom quote each other in this vicious circular fringe firing squad, it almost seems like nostalgia for them.  They want the old days back, when ACORN was alive and kicking, big and bold, and they could feel their own reflection in that sun.  Now they are left pathetic and pleading as the clock winds down on the last minutes of any interest in what they have to say.  They harrumph at the fact that Project Vote “didn’t even change its name” and neither did ACORN International.  Yet after their harrumphing, everything they say is time dated.  They have no capital letter, big sub-heads on their reports that even point a finger at work that Project Vote is doing now.  They simply roar signifying nothing.

They also rant and rave about the fact that some of the former state organizations have changed their name and managed to survive organizationally.  Sadly, they say don’t even try to lay a glove on any of them for any activity in this Presidential election cycle.  They have nothing to say about any of the rebranded organization’s work in voter registration or GOTV work.  There are no new accusations, just rocks thrown from an old discard pile.  I say, sadly, because it also may mean that many have not been engaged in these vital activities in the way low-and-moderate income families desperately need them to be.

One commentator tried to get a head of steam going about candidates for the US Senate who had been friendly to ACORN.  One sad thing about the ACORN reorganization is how few of the rebranded state organizations survived at a viable level for this contest two years later.  They can whine about Ohio deciding the election, but there is nothing alive of the vestiges of ACORN in that critical state where ACORN was so important previously.  The same could be said for Nevada, Colorado, and Michigan, all of which have been listed as battleground states.   Florida and Arizona are shadows of what they once were.  In fact if they looked at their own list, ACORN organizations largely survived, even if diminished, most robustly in states that mattered least in this contest because they were already dark, dark blue or bright, bright red:  New York, Illinois, California, Texas, Louisiana, Arkansas, and so forth.  Our friends in Pennsylvania may be one of the only strong operations still in a state that makes the list as critical in this election.   Nonetheless, hating on ACORN as a parlor sport of the right goes on, largely unimpeded by any contemporary rational analysis.

It’s ok though.  Better for the right wingers to beat on a dead horse, than continue to hammer at some of our fewer and fewer progressive institutions that can claim to be “alive and well.”