New Orleans      New Yorkers are lucky.  Not only do they get to vote with relatively little hassle, but they get to send important messages to politicians about where they stand by voting on unique ballot lines that identify their politics not in broad strokes, but along sharp edges.  Why? Because New York State remains one of the handful in the United States that allows multi-party fusion, even if the established party duopoly hates the practice.

This isn’t hard.  Multi-party fusion means that different political parties, with the concurrence of the candidates, can support the same candidates on their ballot line in an election.  The term “fusion” has become somewhat archaic, as the major parties have pulled their wagons in a circle over the last 125 years to exclude other parties, but simply put to fuse means they come together in agreement.  A dictionary perfectly explains that the synonyms of the verb “fuse” are “associate, coalesce, combine, conjoin, conjugate, connect, join, link, marry, unify, unite…” and so forth.  How wonderful for us to be able to fuse, and how frightening we have found it is for others.

Certainly, ACORN thought it was a great idea and along with the Communication Workers of America and New York Citizen Action joined with Dan Cantor as executive director to form the Working Families Party in New York in 1998.  The WFP has since then hewn to a progressive path in local races and in political positions with grit and conviction, meaning that the party has attracted steadfast friends and supporters and determined enemies, including Governor Andrew Cuomo.  They had the temerity to take a principled stand about the governor’s détente and tacit support for the Republicans controlling the legislature and endorsed his opponent in the last race.  He paid them back by winking and nodding to Democratic party officials and their friends in a hand-picked commission to make it harder to maintain a ballot line, hoping to knock them off the list, and be rid of this avenue for pesky progressives to pressure him to move his program forward.

The test they face this November is straightforward.  The WFP must get 2% or 130,000 votes, whichever is higher, polled on its ballot line for Biden and Harris or we lose our automatic ballot line for the next several years.  As I said, New Yorkers are lucky.  They can have their cake and eat it, too.  They can have their vote counted for Biden-Harris, and at the same time wave their progressive colors.  A lot of us will be pulling the Democratic lever this fall wishing we weren’t offering carte blanche to some uncomfortable positions, but not New Yorkers.

Sadly, the WFP is having to spend time and money and call in chits from Senator Chuck Schumer, Representative Alexandra Ocasio Cortez, and other candidates where its line and energy has made a difference to make itself the issue, rather than its positions, so that the party can protect its line.  In this troubled time, New Yorkers are fortunate to have this chance to send a message on where they stand on the political spectrum.  It’s a contest, but I’m betting on the WFP once again to be able to take this threat and turn it into an opportunity to build its base and electorate.   Now is the time for New Yorkers, near and far, to run up the score for the Working Families Party!

Columbus        Twenty-five people made their way into the Vanderelli Room in Columbus.  The art, performance, and all-around community space in the Franklinton neighborhood of the city near downtown had been offered to TrustVote and the Columbus Free Press as the venue for a matinee meeting entitled “Protect Your Vote.”  The overstuffed diner-style benches that bordered the seating space were the popular first choice of the crowd, pushing later comers into the doughnut hole left in front of the stage. 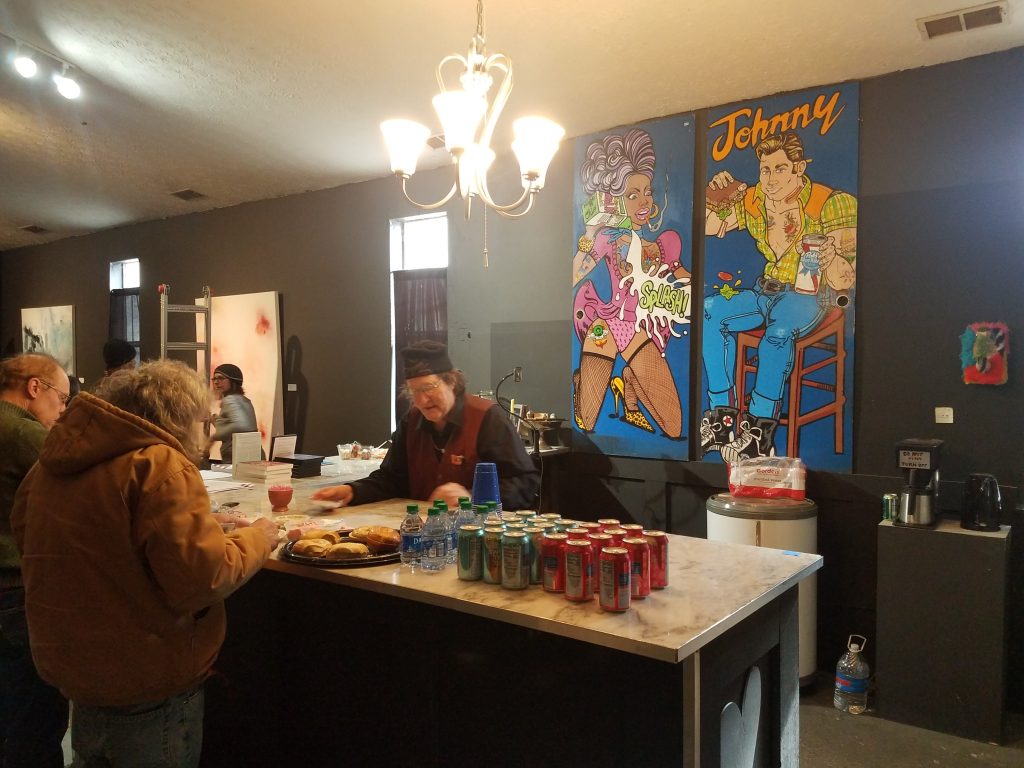 The crowd knew what they were doing, even if they didn’t know the room.  These were veterans of decades of voting rights wars in Ohio fought at the state and county level certainly, but peppered with battle scars from election commission meetings and in the precincts themselves.  Sometimes the stories revolved around ballot access whether with the Green Party or in the Democratic lists with John Kerry in the state or even the 2004 debacle with Bush.  Lawyers, old League of Women Voters veterans, election security experts, poll watchers, door knockers, and others were there to pull their chairs closer to see what the 2020 fight might involve.  This wasn’t about Trump.  This was about how to get the voters through the barriers presented by the politicians, and then how to actually get the votes counted.  This was tech talk with the old school.

Steve Tingley-Hock and I were invited to talk about our partnership between his database expertise and management with the Ohio Voter Project that had combined with ACORN and Labor Neighbor Research & Training Center to create the Voter Purge Project.  I gave the big picture on the range of our work, the links to our website, and the problems with accessing lists and bringing the states to heel with the data and fieldwork.  Steve told the story of his successful efforts in Ohio to restore 40,000 voters by removing them from the purge list.  We took a dozen questions and collected interest and volunteers. 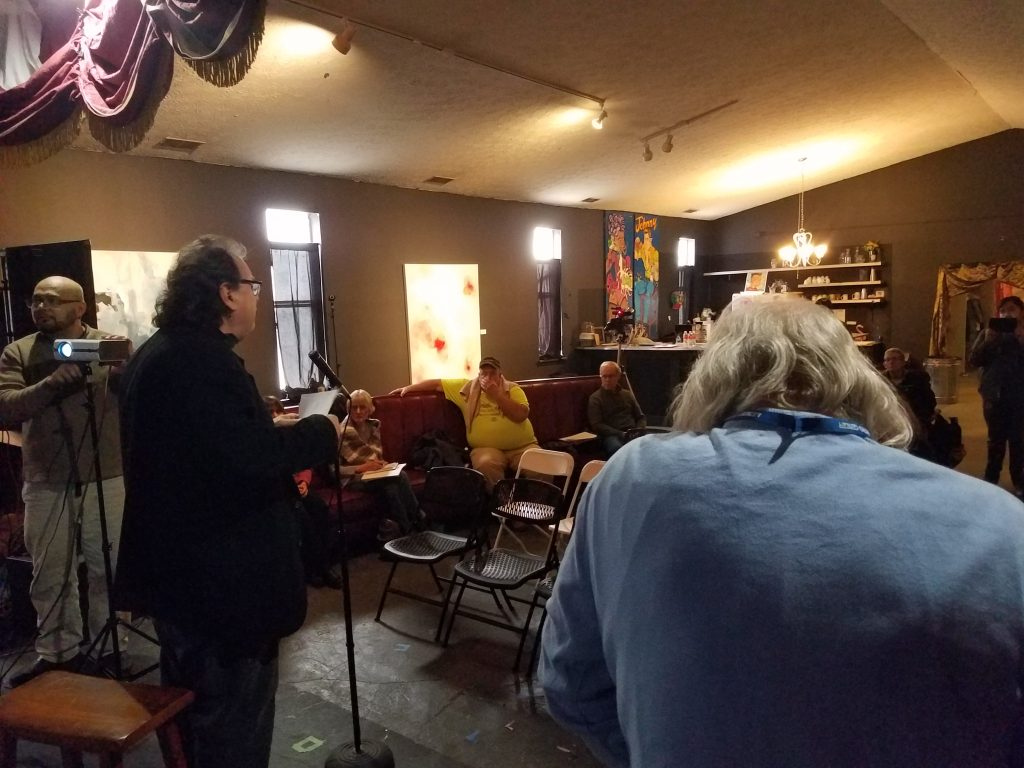 Bob Fitrakis, an attorney, detailed what needed to be done to protect voting access and Suzanne Patzer, the organizer pulling the pieces together, recruited volunteers to help, while getting all the trains to run on time and to the right station.  There was extensive discussion of the Ohio voting machines and the type of records they produced, or didn’t produce, the technical details were described, and the level of privatization of the entire system was derided. John Brakey of AUDIT-USA, a Tuscon, Arizona-based voting rights and transparency advocate and investigator, came to the meeting via Zoom, which after some trial and error, worked better than many of the voting machines he was describing along with his concern about whether or not the machines competently protected and saved ballot images of a voter’s preference.  This was all heady stuff, and the crowd was enthralled.

This was a serious business crowd.  We also heard how Ohio absentee ballots could be manufactured to swing an election with a fake signature and the last four digits of a social security number.  We heard about 10,000 absentee ballots that may have never been counted in Lake County, the moral being, don’t vote that way up there or maybe absentee anywhere.  A security whiz told us how in the Ohio system if you could hack into the machine in any precinct, you could control the whole election.

In Ohio, preparing for an election is akin to getting ready for Armageddon.  They’ve been there, and they are spreading the word.