Little Rock            Sitting around the kitchen table last night with my “outlaws” as they sometimes call themselves out of the blue China was on the agenda.

One was just in from Fort Worth where he was superintending the construction of a music store for a Little Rock construction company.  He related a story from his sheetrock and studs supplier he had hear a couple of days before.  The fella was telling him that if he had had to bid the job again the price would be double for the metal studs that have replaced 2×4’s on construction jobs everywhere.  In fact he would not know how to bid the job, because no one could move the production because “China was buying all of the raw materials.”  The red-hot heat of the Chinese economic growth had surpassed the supply of steel and related products at all levels.

You could read it in the Economist or the Journal, but I could hear it around this table in Little Rock.

Another worked in a factory in the low mountain Ozarks country of southern Missouri on the line for Briggs & Stratton producing small motors for the market.  In her plant the company was shipping motors and parts to China for assembly and then bringing them back to Missouri for final packing and shipping.  For Briggs & Stratton to pay the freight from the U.S. to China it was all about labor costs.  Tears came into her eyes as she told the daily tale of opening a bucket of motors from China and seeing smudged handprints on the top of the package.  She often compared the handprints against her own.  She admitted her hands might not have been dainty, but she could not keep from believing that the tiny handprints she saw almost every day had to be from children.

The other was now at another small plant with 60 workers about 70 miles north of Little Rock that supplied plastic parts for a Maytag plant almost across the street.  Before that he had worked with a cousin reselling auto glass that they bought by the container load from — where? — Of course, China!  They could undercut other glass by as much as 80% sometimes.

It wasn’t China but the next one around the table worked as a supervisor for EDS handling Medicare billings on a huge state contract in Arkansas and said that it had become routine at EDS — remember the old Ross Perot founded company, that’s Ross Perot “of the great sucking sound” of NAFTA in the Clinton election — for a 1000 jobs here, 2000 there to be outsourced to India.

I don’t know whom President Bush talks to or listens to anymore, but there is no way to miss these conversations among hard working people.  They are scratching their heads at the sweating end of the American economic machine.  China and India are a million miles away, but there are no answers to their matter of fact comments and unspoken questions about the future when they are sitting close at home. 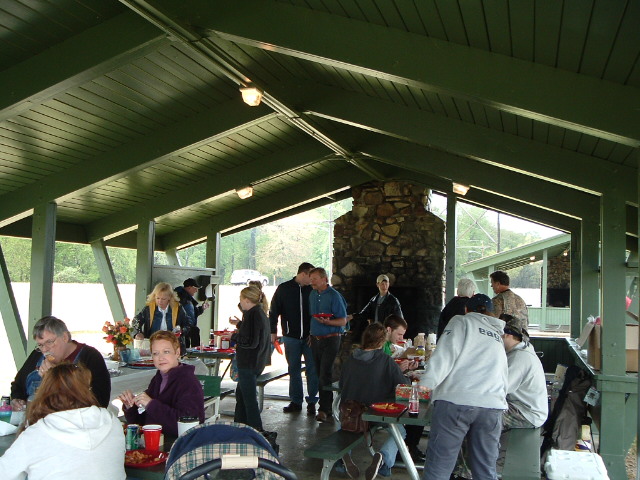